Swan is far from a new variety of honeysuckle, but its popularity among summer residents remains stable. This is due to its positive characteristics, including not only the pleasant taste of the fruit, but also frost resistance, unpretentiousness and decorative appearance of the bushes.

What is this variety of honeysuckle

Swan is a medium-ripening edible honeysuckle variety. Approved for cultivation in all regions.

Fruiting begins 3-4 years after planting, the average yield is 40 c / ha. The fruits have dense flesh, which favorably affects keeping quality and transportability.

Brief history of origin and distribution

Basically honeysuckle grows in the northern hemisphere. Most of the shrubs are decorative - the fruits that appear on them are not eaten. The plant began to be domesticated at the beginning of the 20th century. During this time, breeders have bred many edible varieties, one of which is Swan.

This is the honeysuckle of the Kamchatka line. The variety was bred by breeders of the All-Russian Institute of Plant Genetic Resources named after V.I. NI Vavilov (St. Petersburg) on ​​the basis of Pavlovskaya honeysuckle and seedlings of form No. 21-1.

The variety was included in the State Register of Russia in 1999.

Characteristics and description of the bushes 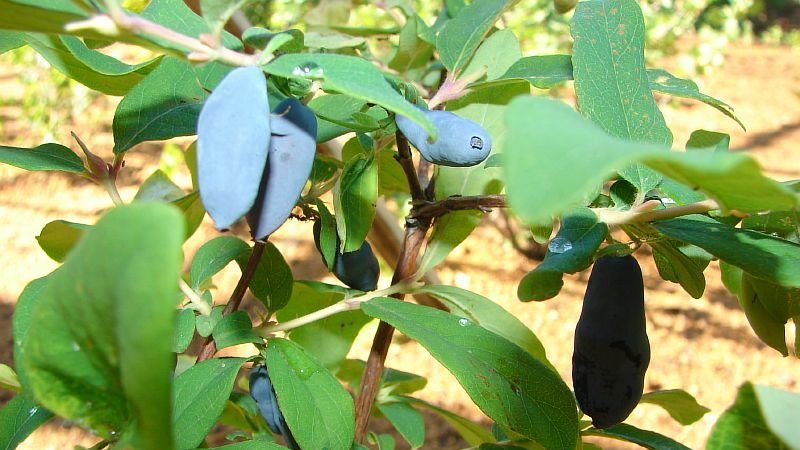 The swan is a vigorous (height about 2 m), moderately spreading bushes with a rounded crown and straight, strong branches. Young shoots are smooth, have a brownish-green tint, the bark on older ones is more brown and exfoliates over time.

The leaves are large, elongated-oval, with a pointed base and apex, slightly convex, colored with a rich green color.

During flowering, which occurs in early May, medium-sized yellowish flowers appear in pairs in the leaf axils.

Reference. Landscape designers often use this variety of honeysuckle to decorate gardens and create hedges.

The bushes can withstand temperatures down to -40 ... -50 ° C and are not afraid of return frosts in spring. Does not require shelter even when grown in the northern regions.

The variety is characterized by an average degree of drought resistance. This means that the bushes endure the lack of watering for a month and at the same time bear fruit, but with a longer lack of moisture, yield decreases, the berries lose weight, and bitterness appears in their taste.

With excessive watering and stagnant moisture, there is a risk of decay of the root system.

The variety is resistant to most diseases, but in case of violation of agrotechnical requirements, the following may develop:

Among the pests, the greatest danger to the Swan is aphid, there is also a risk of being hit by ticks, fingerwings and caterpillars.

Characteristics and description of fruits 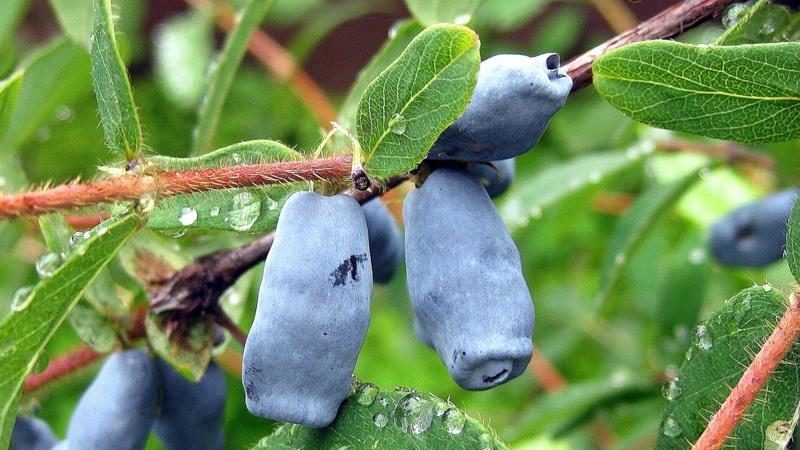 The berries are elongated-cylindrical, barrel-shaped, grow up to 2.7 cm in length and weigh 1.2-1.6 g. The skin is dense, bumpy, bluish-blue with a slight waxy coating.

The pulp is beige with a green tint, dense and gristly. Has a sweet and sour taste and a mild, pleasant aroma.

Areas of their application

Swan fruits are distinguished by their versatility.... They are suitable for fresh consumption, freezing, preparation of compotes, juices, preserves, jams and other types of preservation. They are also used as a filling for baked goods and in making homemade wines.

Leaves and branches are used in traditional medicine for the preparation of medicinal decoctions and infusions.

Advantages and disadvantages of the variety

Cons of the variety:

Despite the unpretentiousness and endurance of the variety, proper care and comfortable conditions are required to obtain healthy, abundantly fruiting shrubs.

Reference. So that bushes with an open root system take root better, before planting, they are placed in a solution of a growth stimulator ("Epin", "Kornevin") for 2-3 hours.

Honeysuckle is planted in a sheltered and well-lit area... In partial shade, the bushes grow and develop well, but the lack of light negatively affects the yield and taste of the berries.

Waterlogging is detrimental to the root system of plants. Therefore, when choosing a place for planting, the level of occurrence of groundwater is checked - they should be at least 1 m from the earth's surface.

The swan is planted in spring (March) or late summer-early autumn (August-September).

Reference. When planting in the spring, the bushes often get sick, stunted and do not have time to adapt to the beginning of the early growing season.

Honeysuckle is watered 1-2 times a week, pouring 10-15 liters of water under each bush. The frequency of watering is increased as needed, for example, during hot and dry summers.

Reference. To retain moisture in the soil, it is mulched with peat.

After watering or rain, the soil is loosened to improve the saturation of the roots with moisture and oxygen, and weeded to remove the weeds that thicken the area.

The plants are fed 1-2 years after planting. In the spring, 5-8 kg of manure is applied under each bush, in the fall - complex mineral fertilizers, preferably those in which the content of potassium and phosphorus is increased.

In the spring (before bud break) and autumn (before frost), sanitary pruning is carried out, removing old, damaged and growing branches from the bushes.For bushes over 7 years old, every 3 years, a rejuvenating pruning - in autumn, all shoots are cut off, leaving hemp 30-40 cm long.

Diseases that can affect the Swan:

Among pests for this variety, aphids are especially dangerous. To prevent its appearance, the plants are sprayed with garlic-pepper infusion. If insects have already attacked the bushes, they are treated with insecticides ("Aktara", "Biotlin", "Iskra").

Reference. The use of insecticides is allowed only before budding and after harvesting.

Plants begin prepare for winter in early October. To do this, the bushes are cut, and the land on the site is weeded and cleaned of plant residues and other biological debris in order to avoid the risk of pests and fungal diseases.

After that, the soil is loosened, phosphorus-potassium fertilizers are applied, spilled with fungicides (Vectra, Gamair) and insecticides (Akarin, Aktara) to prevent diseases and the appearance of insects, and mulch with peat.

The bushes tolerate frost well and do not need shelter.

The swan is propagated by green or lignified cuttings, layering and dividing the bush.

In the summer, after harvest, green cuttings 7-12 cm long are cut from the central part of the stems so that each has 4 internodes with a bud and a leaf. In autumn or early spring, lignified cuttings with 3-5 internodes on each are harvested.

Cuttings are treated with a growth stimulator (Kornevin), placed in a peat-sand mixture (proportions 1: 2), deepening by 2-4 cm, the container with plants is covered with polyethylene. The land is watered daily, and the greenhouse is aired. The cuttings take root after 2-3 weeks.

For mature plants, the division method is used. The bushes are dug up, the root system is divided into several parts, the sections are treated with an ash solution, and then planted in a permanent place.

For reproduction, a strong shoot growing below is chosen by layering, bending it to the ground and buried in it. When it forms an independent root system, it is separated from the mother bush and planted in the ground.

Features of growing this variety, depending on the region

The Swan cultivation technology does not depend on the region, only the optimal terms differ landing seedlings. So, in temperate climates, it is better to plant plants in mid-September, and in the southern regions - in early October.

Reference. In the case of spring planting, they are guided by the time of snow melting.

This culture is self-fertile, so suitable pollinating varieties are planted nearby.

Reference. To increase the likelihood of pollination, 3-6 different varieties are planted nearby.

Gardeners liked the variety, as evidenced by their positive reviews.

Maria, Ufa: “I grow the Swan for myself, the yield is not high enough to be enough for sale. I like the variety because it gives very tasty and healthy berries, which do not crumble immediately after ripening. The bushes are very beautiful, I have a whole hedge of them on my site. The only disadvantage of the variety is its susceptibility to aphids.

Natalia, Voronezh: “I have been growing this honeysuckle for more than 6 years, I tried other varieties, but somehow they did not take root with me. I love the swan for its large, tasty fruits, frost resistance and unpretentiousness. "

Victoria, Nizhnevartovsk: “Since there are several varieties of honeysuckle growing on the site, I can definitely say that I love Swan the most. A completely unpretentious plant, you don't even need to cover it for the winter. The main thing is to water regularly and cut off dry branches. The bushes are very beautiful, and the berries are tasty and healthy. "

The swan is one of the first varieties of edible honeysuckle bred by breeders. Despite not the highest yield, many summer residents prefer to grow it. This is due to the unpretentiousness, frost resistance of the bushes and the pleasant taste of large berries.

How to store turnips for the winter: storage methods in the cellar, in the freezer and at home, is it possible to freeze and preserve the root crop

Is it possible to eat potatoes for diarrhea: can an adult have constipation or diarrhea from boiled potatoes?

Pruning honeysuckle: why, when and how to do it right

Aphids on honeysuckle: how to process so as not to ruin the crop

Why honeysuckle does not bear fruit well

How to properly care for honeysuckle in spring - feeding and pruning

Where honeysuckle grows well: conditions, varieties and regions for growing in Russia