In order for the grapes to bear fruit well every year, not to grow, turning into impassable thickets, one should not neglect the care of them in the summer. Throughout the season, procedures are carried out aimed at developing the culture and increasing yields.

In the summer, agrotechnical measures are carried out aimed at strengthening and developing the root system of the culture, the formation of shoots, the ripening of the crop.

The procedures differ from the spring and autumn ones, since in the warm season the bushes intensively increase the green mass and form ovaries, which turn into clusters with ripe berries. It is important that the grapes remain healthy and receive maximum nutrients and moisture, retaining the potential for the next season. 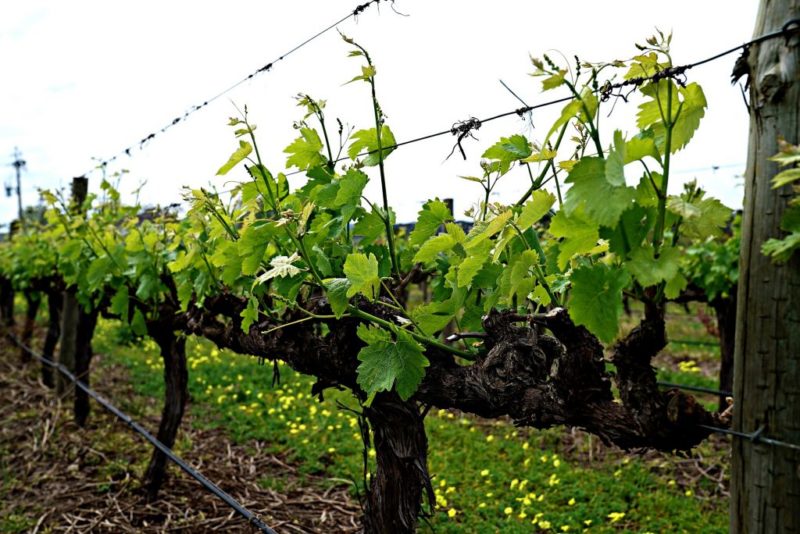 Methodical and regular care is the key to not only getting a bountiful harvest, but also developing a strong immune system.

Summer works in the vineyard include:

In June, plants are cleaned and pinched so that flowering is effective. By the end of the month, the crop is formed, leaving the required number of bunches. In July and August continue pruning, remove excess leaves, shoots and roots. Watering is regularly carried out throughout the season, feeding, treatments against diseases and pests.

What conditions are required for grapes in summer

If the site was chosen correctly for the vineyard, in the summer the bushes will receive the right amount of sunlight and moisture. A heat-loving culture requires a special microclimate.

For good growth and high yields, it is desirable that climatic conditions meet the following requirements:

Soil moisture varies in different regions and depends on the amount of precipitation, humidity and air temperature. This indicator is adjusted by watering.

Even in the bad season, when the weather is unstable and the grapes are attacked by infections, experienced gardeners get bountiful harvests. They use time-tested methods and care for the shrubs properly. 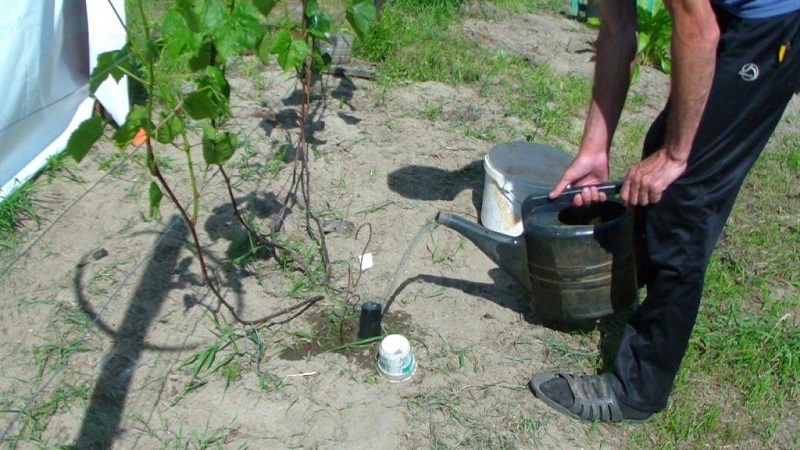 The grapes do not need frequent moisture. In areas with good soil, the procedure is carried out 1-2 times a month, but the soil is irrigated very abundantly so that the water seeps to the deepest layers.

The minimum rate is 20 liters per m². During the heat, the soil is moistened more abundantly than usual.

Attention! In the second half of August, watering is reduced or stopped altogether for early varieties. This will avoid cracking the berries. 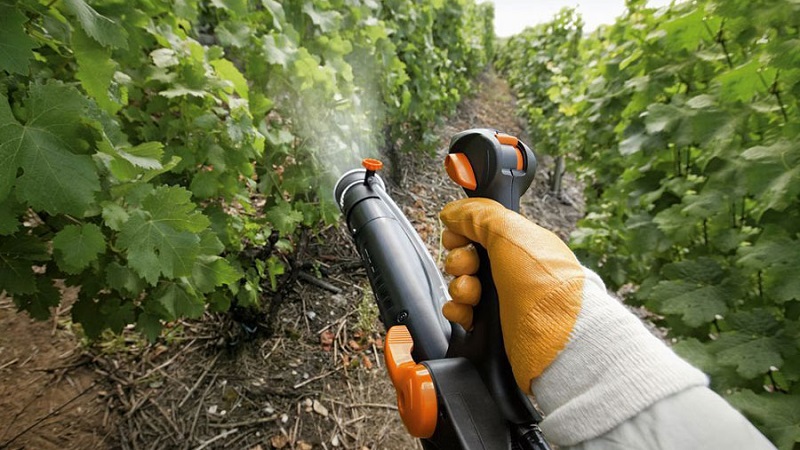 The culture is watered until the berries have softened and acquired the color characteristic of ripe fruits.If there is enough precipitation, the soil is not moistened at all.

Fast-growing bushes spend a lot of energy on the growth of young shoots. So that the nutrients are not wasted in vain, but went into the formation and maturation of the vine, pruning is regularly carried out in the summer.

When caring for vines, a balance is observed between empty and fruitful shoots so that the load on the bush is even. Young shoots are broken out and pinched. First, empty branches are removed before and after flowering, and then stepchildren.

Summer pruning is usually done without the use of garden tools. 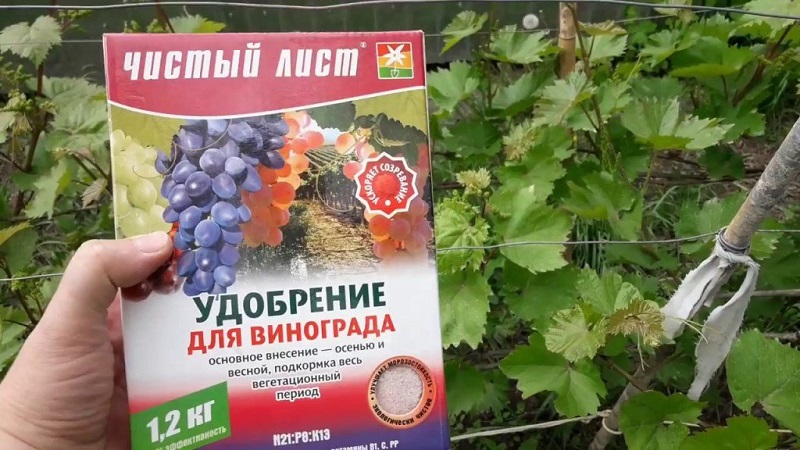 To increase the yield, fertilizers begin to be applied 1-2 weeks after the end of flowering and the first summer pruning.

The following mixtures are used:

A week before the berries reach technical ripeness, a solution of 10 liters of water, 20 g of potassium fertilizer and 20 g of superphosphate is introduced under each bush.

A must for summer top dressing - a sufficient amount of water so that nutrients can easily penetrate into the soil to a great depth.

Protection against diseases and pests 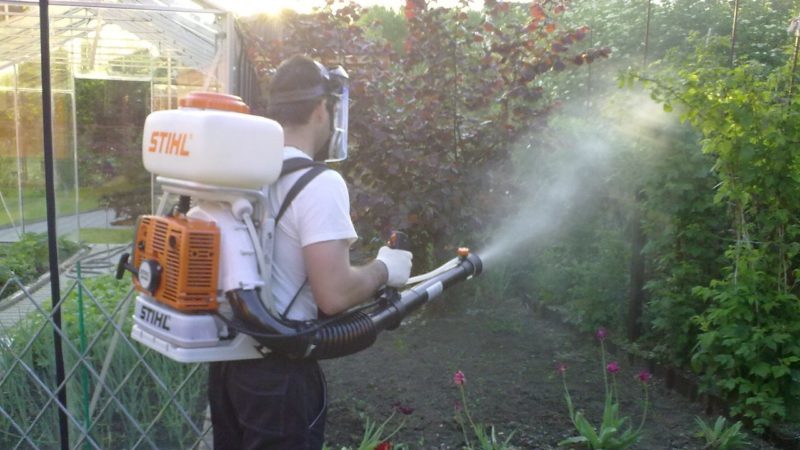 You cannot neglect the prevention of infections in the summer, even if all the necessary procedures were carried out in the spring.

The ash solution is periodically used throughout the summer (1 kg of ash is infused in 10 liters of water). This safe remedy also feeds the grapes.

Processing for a good harvest 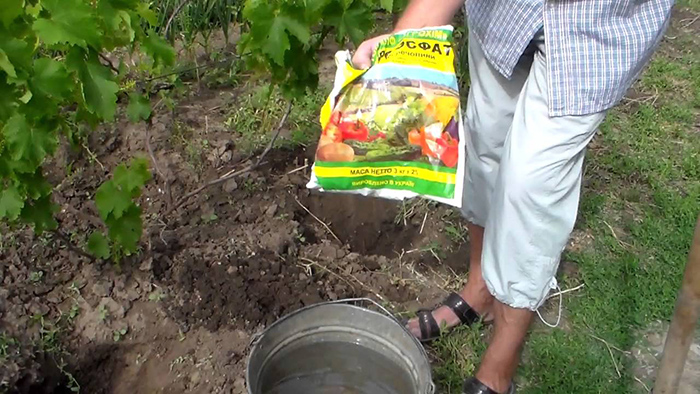 To accelerate the ripening of grapes in August, top dressing is carried out at the root. How to process grapes in a cold summer for a good harvest? For each bush, one of the funds is applied:

To avoid contamination of the fruit with an infection, be sure to remove cracked or rotten berries.

Empty and weak shoots, stepchildren negatively affect the plant, taking away some of the nutrients. Therefore, they are regularly removed. Start pruning immediately after flowering and continue throughout the summer.

Reference. Stepsons do not break off under the very base, since new processes appear immediately. It is recommended to cut 2 cm from the first sheet.

If you neglect the procedure, the bushes grow thickly, are not ventilated, sunlight hardly penetrates the vines, and the risk of rotting increases.

Long shoots that are ripe and woody are tied up in several places. Their tips are especially carefully fixed so that heavy clusters do not pull the branches down. It is impossible to overtighten the vines, therefore the elastic material is chosen, or a small gap is left between the shoot and the support.

The vines are tied up before long young shoots appear, so as not to damage the green growth. The yield and further development of the bushes are positively influenced by horizontal dressing or fixing the vine at an angle of 45 °.

Excess inflorescences are removed to increase yields and improve the taste of the fruit. The procedure is carried out before flowering, an optimal load is formed on each vine.

With the help of correct normalization, optimal accumulation of sugars in berries, which ripen on time, is achieved. If the load on the vine is too high, the fruits ripen late and remain sour.

As initial data, they rely on information about the variety (average bunch weight, shoot length). The optimum value is 1 m² of leaves per 1 kg of berries. 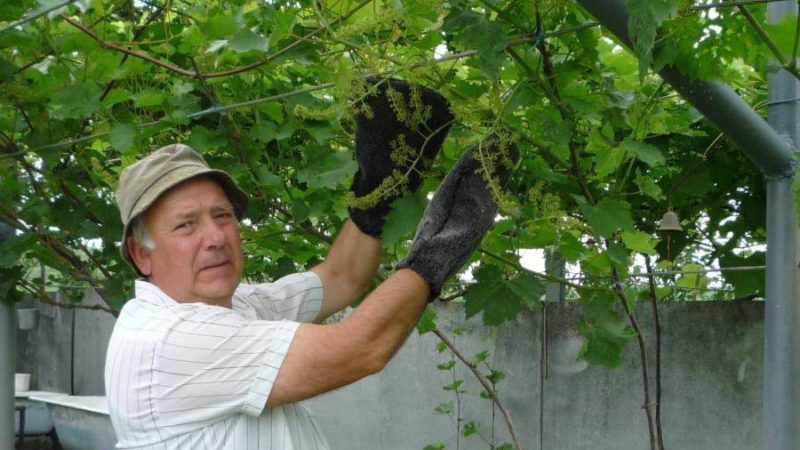 In early summer, before the flowering of the grapes, pinch is done, removing the upper parts of the young shoots. To do this, squeeze and break off the green part with your fingers, leave about 10 cm before the beginning of the lignified part of the vine... As a result, the growth of shoots is suspended, and nutrients are directed to the formation and strengthening of inflorescences.

Embossing resembles pinching, but differs in a deeper removal of the top of the shoots. It is carried out at the end of summer so that the berries ripen faster. During the procedure, the shoots are shortened to a length of up to 40 cm. At least 14 leaves are left on each branch.

Coining is not recommended to be carried out earlier than the prescribed time, as this will provoke intensive growth of stepchildren and slow down the ripening of the crop.

Removing some of the leaves is called clarification. The essence of the procedure is to provide the plant with sufficient air and sunlight. Leaves are removed that block the rays of the sun in the bunches and interfere with the ventilation of the bushes.

It is not recommended to leave removed foliage on the soil at the roots. Over time, bacteria are formed in it, which are transferred to the bush.

In the first two years of life care is the same for all varieties. When the bush begins to form and bear fruit, an individual scheme is selected for each plant.

For early-ripening grape varieties, all procedures are carried out 2-3 weeks earlier. 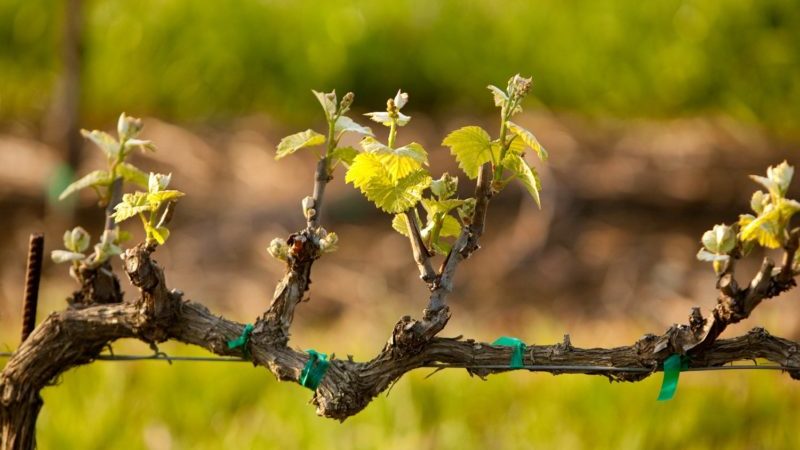 Young bushes take 4-5 years to form. During this period, competently cut off shootsto get a shrub without thickening and overloading.

Reference. When caring for a young bush, more attention is paid to watering. The older the grapes, the more powerful their root system is, capable of extracting moisture from the deep layers of the soil.

When the grapes begin to bear fruit, the pruning methods change to standard ones: in the summer they carry out pinching, pinching, chasing and clarification.

Depending on the region of cultivation

The best areas for growing grapes are in the south. However, there are varieties that are suitable for central Russia, the Urals and even Siberia. Summer care methodology varies little by region.

Gardeners rely on rainfall when adjusting watering and solar radiation when pruning. 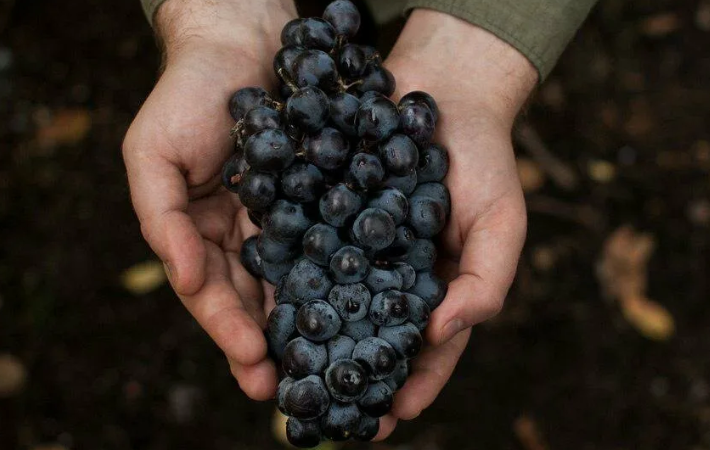 To maximize yields, beginners follow the recommendations of experienced gardeners.

Bushes that have not received proper care in summer become weak, often die in winter or bear poor fruit in the next season.

In addition to climatic conditions, productivity also depends on the correct summer care of the grapes.

Throughout the season, they carry out regular pruning, tie up vines, thin out the leaves, treat bushes for diseases, water and feed. Depending on the age, type and region of grape growing, the nuances of care vary.

How and how to process tomatoes from scoops in the open field: folk remedies for the protection and poison of the pest, garlic

Is it possible to plant cherries in July and how to do it correctly: instructions and advice from experienced gardeners

Zucchini variety "Cavili" from Dutch breeders: what you might like and how to grow it correctly
Popular articles

How to water and feed grapes in spring: instructions for beginners

How to properly care for grapes in July: what to do, tips for novice winegrowers

Preparing grapes for winter: the secrets of processing in the fall before shelter

When and how to properly prune grapes in spring for beginners step by step: instructions and diagrams