Often, gardeners are faced with a problem when, during the fruiting period, currant leaves curl, quickly lose color, dry out and fall off. This means that crop losses are inevitable. To save the bush, it is important to find out who is to blame - pests or diseases. In this article, we will consider why the leaves curl and what to do about it. 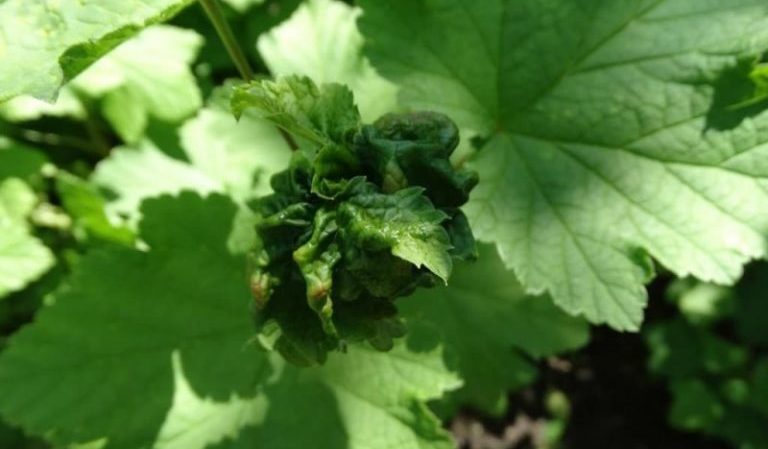 The currant is susceptible to pathogens and insects. The risk of injury depends on the type of plant. So, black currant suffers from pests much less than red. Specific pests are leaf rollers, aphids, spider mites, and glass.

The damaged plant lags behind in growth, withers, ceases to bear fruit, and then dies prematurely. If currant leaves curl, you need to unfold them and carefully examine for the presence of larvae, cobwebs, growths and spots. 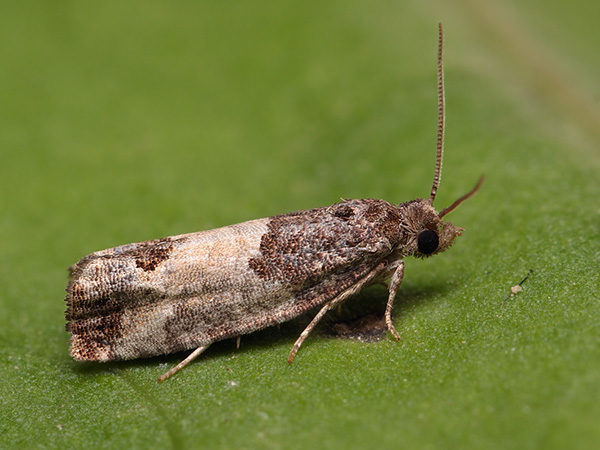 Currants are often attacked by a curved leafworm - a medium-sized butterfly 10-20 mm long. Sexually mature individuals are light green or green in color.... The front wings are buffy or brown in color, the hind wings are dark gray with a yellow margin.

Insects feed on all parts of the plant, but most often infect the leaves. A characteristic feature is a cobweb, a viscous secret secreted by leaf rollers for better fastening during the period of rolling the leaves around them.

For reference. The rolled leaves must be torn off and burned. Do not leave them in the compost heap or the plant's trunk circle. Otherwise, the larvae will overwinter safely, and in the spring the invasion of the leafworm will repeat.

Gardeners distinguish 3 methods of exposure to an insect: 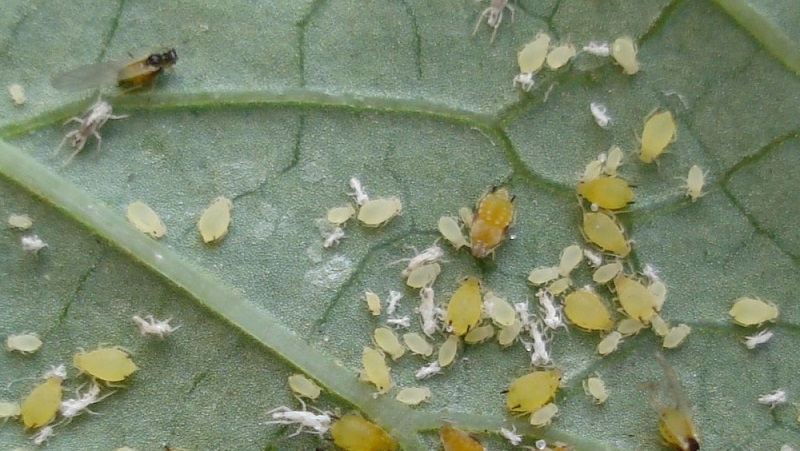 Often, currants are attacked by gallic (redcurrant) aphids. These are small, almost transparent insects of a pale green-yellow hue, without wings. The presence of a pest can be easily identified by the appearance of brown and yellow swellings on the top of the leaf. Gradually, the tubercles begin to darken, and the leaves of the currant curl. How to treat the plant depends on the development cycle of the insect. For sexually mature individuals, the use of insecticides is optimal. If you have to get rid of the clutch of eggs, it is better to use folk methods.

Aphids spoil currant leaves until mid-July, after which they move to other plants. Eggs are laid in autumn. They winter safely on the branches, the larvae appear in early spring.

For reference. Gallic aphids rarely settle on black currants, preferring colored varieties. They have thinner leaves, it is easier for an insect to pierce them and extract sap.

The following methods are popular among gardeners:

They are safe for humans, do not harm the plant. They are actively used during the fruiting period. You can use "Aktofit" (as when fighting a leaf roll) or give preference to "Fitoverm".

The death of pests occurs 2-3 days after the primary treatment of the plant. The consumption of the drug is 2 ml per 1 liter of water. Fitoverm is used as pests appear during the growing season. 2-3 treatments are enough with a time interval of 5-7 days.

Toxic, not used during fruiting. After rains, re-treatment is necessary. The use of insecticides is justified when insects attack in large quantities and when other methods are ineffective.

Important! Harvesting begins no earlier than 20-30 days after the last insecticide treatment. 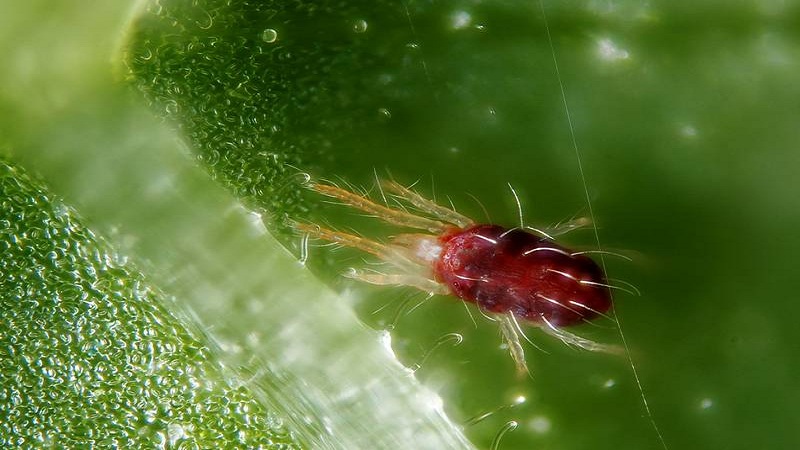 The appearance of a tick can be recognized by a thin gray spider web, yellowing and twisting of leaf plates, weakening of the growth of bushes. Due to the small size of the pest, it is very difficult to spot in time. Infection usually starts from the lower leaves, gradually spreading to the upper young ones. It is recommended to carefully examine the oldest leaves for spotting. Larvae and adult mites are localized on their lower part.

Timely detection of ticks is the key to the effectiveness of treatment. Active period breeding falls in the second half of spring.

It is better to irrigate the bushes with infusions with a deterrent smell:

Colloidal sulfur can also be used to suppress the vital activity of ticks and prevent their spread.

What to do if leaves curl due to tick activity:

A spider mite is not an insect, it belongs to the class of arachnids, so it is irrational to use insecticides. Ticks are adversely affected by acaricides and insectoacaricides. Usually, 2 treatments per season are sufficient, excluding the flowering time of the currant. 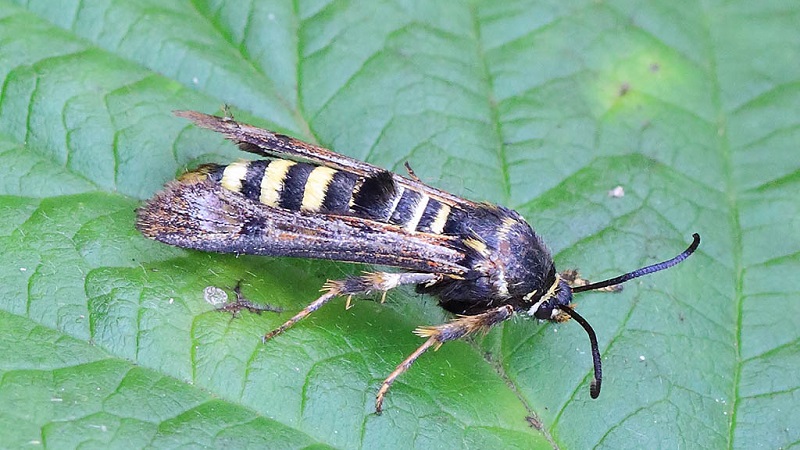 These are caterpillars with a whitish body and a black head. The pest prefers young black currant bushes. Caterpillars appear at the end of June. They move along the entire shoot down to the root, gnawing out the core and leaving a hollow place. With a longitudinal section of the branch, the course with the caterpillar or its excrement is clearly visible. Damaged shoots stop growing, dry up and break off. The bush does not bear fruit well, the berries become sour.

The caterpillar hibernates in the branches, therefore, if a pest is found, dry shoots must be cut and eliminated. The procedure is carried out throughout the growing season.

Traditional methods are aimed at scaring off adults. For this, homemade traps are used. In the form of bait, cardboard of red or yellow color is installed, under which cans of molasses are placed. The bright color attracts butterflies, but they cannot cling to the cardboard and fall into the sticky jar. To scare away, small rags soaked in gasoline are hung on the bushes. The pungent smell interrupts the aroma of currants and prevents butterflies from detecting it.

For reference. They begin to process currants as soon as at least one of the adults falls into the trap.

Biological insecticides, for example, "Bitoxibacillin", can be used only at the stage of prophylaxis. 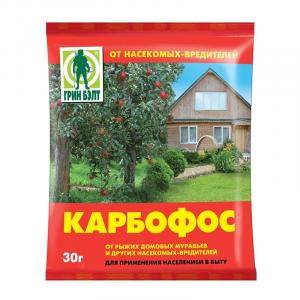 Only chemicals help in pest control:

If the complex measures turned out to be ineffective, the damaged bush is cut at the root and burned.

Preventive procedures are carried out in the fall, so that the pests have no chance to lay eggs:

To exclude the penetration of larvae into the bark of the plant, all care work is carried out as carefully as possible, without damaging the bark.

If currant leaves curl, it is important to understand what kind of pest attacks and how to treat it, because the safety of the crop is at stake. For some pests, folk remedies are enough; in the fight against others, you will have to use several types of insecticides per season.

Why gooseberries turn yellow in summer, what to do when the leaves dry and fall, how to treat diseases and pests

Tomato Danko: characteristics and description of the variety of tomatoes, photos of bushes and fruits, reviews of those who tried to grow them

Storing eggplants at home: different ways and terms of keeping vegetables fresh, as well as drying, freezing and preservation