It is rare to find a family that does not use a crop such as potatoes in their diet. It has long become our “second bread”, a lot of interesting dishes have been invented from potatoes. The vegetable is not only tasty, but also very healthy. But few people know that potato peelings also have some value - they serve as an excellent organic fertilizer. Experienced gardeners have long adopted this method of feeding plants on the site. We will tell you how to use potato peelings in the fall for feeding currants.

Properties and composition of potato peels 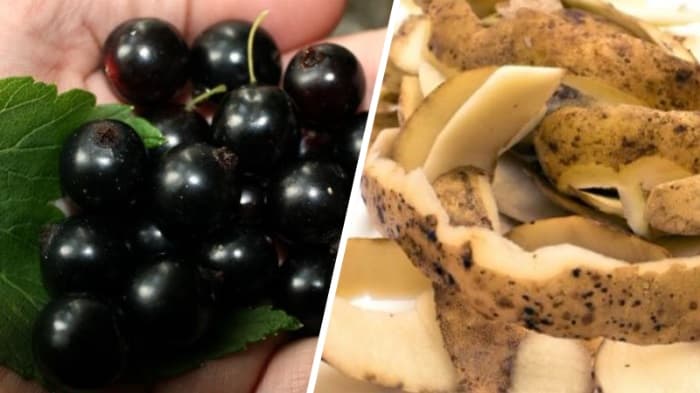 The potato peel contains no less nutrients than the vegetable itself. There are more than 20 of them, among which are:

All of these elements are essential for plant growth and fruit formation. Feeding currants with potatoes is a win-win budget option.

Fertilizer from potato peels great for any fruit and berry bushes, including currants. With the decomposition of the peel, the soil becomes looser, saturated with vitamins and microelements, which, by absorption through the root system, stimulate the active growth of the plant. Potato peelings protect the plant's roots from many ground pests.

Useful for currants in the composition of potato peel glucose of natural origin - starch. It is he who contributes to the formation of larger, juicy berries and makes them sweeter.

How to prepare fertilizer

To cook fertilizer from potato peels at home, there are 2 ways: by drying and freezing.

The most time consuming, but at the same time the most successful method of preparing top dressing. First, the cleaning is washed from dirt and excess moisture is removed by wringing out with hands or paper towels. Then they are dried naturally or in the oven.

With natural drying, the peel is laid out on a sieve and placed on a battery in a well-ventilated room. In time, the procedure can take 2-3 weeks.

Important! The cleanings are evenly distributed over the sieve, without piling up a hill, so that the air can circulate freely. If this is not taken into account, the peel will begin to rot.

When drying in the oven, spread the peelings evenly onto a parchment-lined baking sheet. The temperature should not exceed + 120 ° C, during the drying process it is reduced to + 90 ° C. It is best to keep the oven ajar to remove excess moisture.

Store dried potato peel in a dry place in a cloth bag.

The fastest way to prepare fertilizer. This requires a freezer. Owners of private houses in winter store cleaning them at subzero temperatures in any unheated building.

Important! Do not re-freeze cleaning. If they were stored outside and began to thaw with the arrival of spring, they should be immediately used to prepare top dressing.

There are many ways to prepare potato peel top dressing. Below we will consider the most popular. 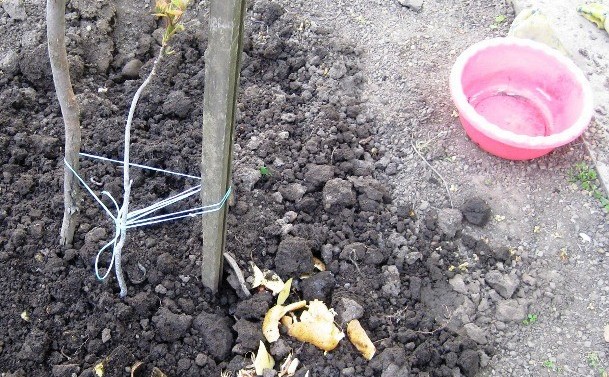 Fertilizer infusion is made from both frozen and dried peel. Frozen is pre-thawed.To prepare the infusion, 2 kg of cleanings are poured into 10 liters of boiled water. The mixture is left for several days in a warm place.

When preparing an infusion from dry cleanings, take 1 kg per 10 liters of water. The resulting infusion is fertilized with currants, pouring no more than 1 liter under each bush.

Important! Before fertilizing the plant, remove the peel from the infusion.

Top dressing in the form of gruel is made from dried peel, which is poured with boiling water and left in this form for up to 7 days. In the water, the cleaning will begin to swell and, after the expiration of the period, turn into a slurry. It is used as a fertilizer: it is passed through a sieve and buried in the ground under a bush.

To make flour, dried peelings are ground in a blender and placed in tightly closed containers. The resulting fertilizer is not stored for long. It should be used when feeding in the spring.

Flour can be used as a top dressing unchanged, sprinkling it on the ground around the bush, or for preparing an infusion according to the same recipe as with dry cleanings.

Important! Currants are fed during the growing season, fruit formation and a week before harvest.

What should be the result of fertilizers

Fertilizing the soil with potato peelings is very difficult to oversaturate it. It is a natural, environmentally friendly product, harmless to the environment and directly to plants.

If currants grow on heavy clay, peat soils, potato peel fertilization will make the soil looser and more fertile, saturating it with useful microelements. All this contributes to increasing yields and obtaining delicious berries.

How to properly care for honeysuckle in spring - feeding and pruning

How and what to feed pomegranate at home

When is it better not to use potato peel top dressing?

You should not fertilize currants with potato peelings in early spring, when there are still night frosts. Such feeding is able to warm up the earth and stimulate root formation and plant growth, and a decrease in temperature at night will lead to the culture dying.

This fertilizer is not suitable for all plants. So, for example, it is not worth fertilizing tomatoes, peppers and eggplants with it, since they have common diseases with potatoes. 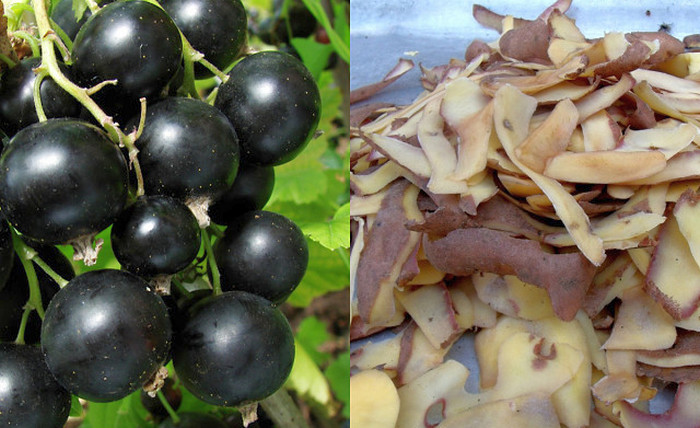 Potato peelings are the best fertilizer for currants. They are rich in vitamins and microelements necessary for feeding fruit and berry crops. This type of fertilizer is not only environmentally friendly, but also very cheap, available to any gardener who wants to get a rich harvest.

Dill for kidneys with stones and other diseases: how to properly brew seeds and herbs and drink the resulting broth

What buckwheat is combined with with proper nutrition: what is it useful to eat buckwheat porridge with on PP, examples of bad and good combinations for losing weight