The yield of currants depends not only on favorable climatic conditions, but also on compliance with the rules of agricultural technology and preventive measures to combat diseases and pests. The appearance of red spots on the leaves of a plant means that it is affected by the fungal disease anthracnose or has been attacked by a gall aphid. When the first signs are found, it is important to take appropriate measures right away, since both problems lead to crop loss and increase the risk of currant death.

What to do if red spots appear on the leaves of red currant? It is important first to inspect the plant and determine whether the problem is caused by anthracnose or gall aphid.

The fact that the bush is affected by gall aphids is evidenced by tubercles brown and red irregularly shaped. On the underside of the leaf you can see small pale green insects about 2 mm long. The larvae are yellow-white. Aphids suck the juice from the leaves of the bush. To heal wounds, the plant forms red growths. 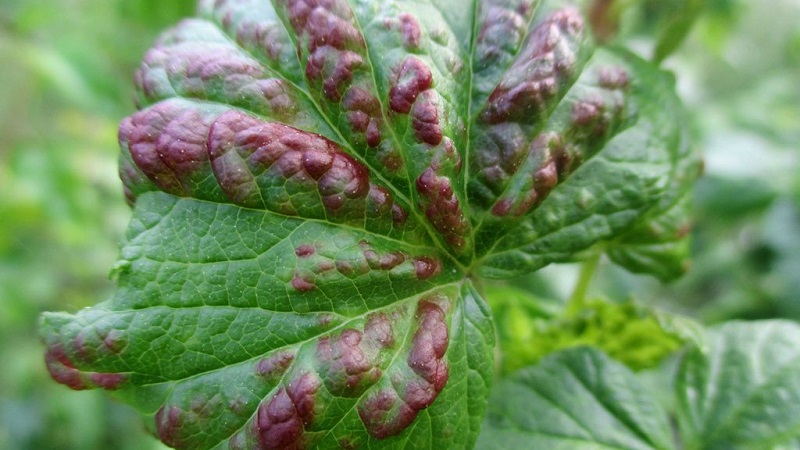 Most often, the pest settles on red and white currants., since their leaves are more tender, it is easier to pierce them. Insects are rare on black and golden species.

For the winter, the aphid lays black eggs, which remain on the branches of the plant.... With the onset of spring, larvae hatch, sucking the juice from the leaves. Scattering all over the district, they give from 6 to 7 new generations. Insects live on currants until mid-July. As soon as the foliage coarsens, they move to oregano, lavender or sage. If you do not take measures to combat gall aphids, the yield is reduced, the shrub is sick and may completely die.

How to process in spring

If red convex spots appear on the leaves of the currant, what means of struggle to use? To get rid of aphids, it is recommended to use folk methods at an early stage.... If they do not work, chemicals are used.

In the spring, many gardeners scald the plant with unblown buds with boiling water... For this, the water is boiled and allowed to cool down to + 70 ° C. Then fill the container with a spray and process the bushes.

Effectively spraying currants with iodine solution (1 drop in 1 liter of water). The plant is treated with a liquid at room temperature.

A solution of laundry soap helps to get rid of aphids... Use half a piece for 10 liters of water. It is rubbed on a fine grater and dissolved. The whole bush is sprayed with the product.

To deal with aphids make various infusions with which the affected plant is treated: 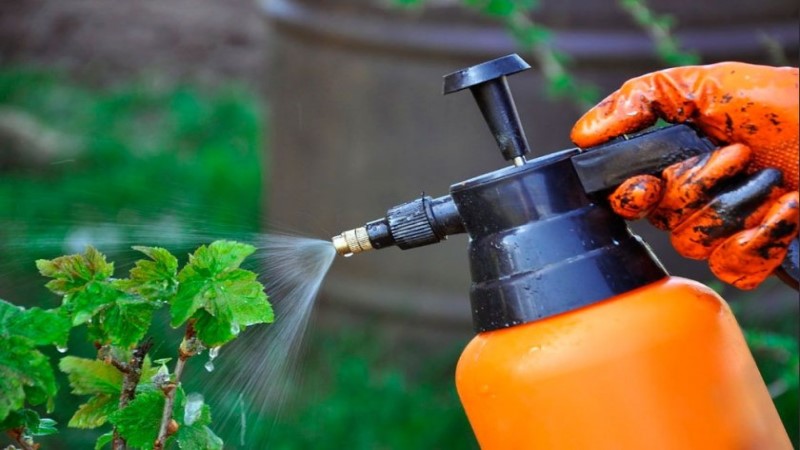 Effectively fumigating currants with smoke... It gets into hard-to-reach places, where infusions do not penetrate when spraying. For this, burnt rubber is used. This procedure is carried out only before bud break.When the leaves bloom, cut off the tops of the shoots affected by aphids, repeat 2 times, after 10 days.

Reference! Chemical means for processing are used only in extreme cases: with an extensive lesion and a completely depressed state of the plant.

If the leaves of the bush begin to swell due to aphids, biological preparations that are safe for humans are used, created on the basis of fungi, viruses and spore bacteria ("Aktofit", "Avertin", "Bitoxibacillin"). Chemical preparations are effective against insects: "Aktelik", "Vofatox", "Proteus", "Calypso". Since toxic substances are retained in the tissues of the plant, the currants are treated with insecticides before the buds appear and after harvesting. When using chemicals, it is important to observe safety measures and strictly follow the instructions.

Spotted bulge on leaves with anthracnose

Symptoms and treatment of spotty bumps on leaves with anthracnose have their own characteristics.... All types of culture are susceptible to fungal disease. The causative agent of anthracnose is able to survive the winter under the bushes. Various insects spread the infection. Moisture contributes to an increase in the growth of pathogenic microorganisms, therefore, most often currants are affected by a disease in the rainy season.

A fungal disease occurs on the leaves of a shrub. First, small brown specks form on the upper side of the leaf plate. with a brown edging and a dark tubercle in the center. Then they grow and merge. The entire leaf is affected, which impedes the movement of nutrient juices. It dries up prematurely and falls off.

Reference! Red currant bushes survive this disease worse than others. They are affected by stalks, petioles and berries.

Fallen diseased leaves are a source of infection in May and June... Later, conidiospores are formed, which spread the infection in July and August. Annual damage to the bush by anthracnose leads to the death of the branches and the entire plant.

The main causes of the spread of spores of a fungal disease:

After the first signs of the disease appear, it is important to remove the damaged parts of the plant and disinfect it. When the leaves fall off, a second disinfection is carried out.

As soon as the leaves of the bush start to turn red, treatment is started immediately to save the crop and the plant itself... Various chemicals are used for the disease. Fungicides interfere with biochemical reactions that take place in fungal cells. Those cease to multiply fully and die. To combat the disease use "Previkur", "Kuproksat", "Ridomil", "Fundazol", "Acrobat MC". Before using them, it is important to carefully study the instructions, since all drugs differ in hazard class and method of exposure to the plant.

As with gall aphid, a solution of laundry soap is used to combat anthracnose.... To do this, grind half of the bar on a fine grater, pour 10 liters of water and stir until completely dissolved. The resulting liquid is sprayed with the affected currants.

Until the leaves appear, the bush is treated with a 1% solution of copper sulfate. Before flowering, "Topsin-M" is used. When the ovaries begin to appear, the culture is fed with ash. To develop a stable immunity in a plant, complex fertilizers containing nitrogen and boric acid are used.

After harvesting, the bush is treated with Bordeaux liquid... To prepare a 1% solution, take 100 g of copper sulfate and 150 g of lime. They are dissolved separately in 1 liter of hot water. Each solution is made up to a volume of 5 liters by adding cold water. The milk of lime is filtered through a thick gauze, and then a solution of copper sulfate is poured into it in a thin stream, often stirring.

Important! Bordeaux liquid is stored no longer than a day, so it is used immediately after preparation.

In autumn, fallen leaves from an infected plant are collected and burnedto kill fungal spores. The soil is dug up and the bush is sprayed with fungicides, for example, "Nitrofen".

To reduce the likelihood of diseases due to which the leaves turn red and swell, preventive measures help. So, for planting select varietiesanthracnose resistant (for example, Victoria, Dutch red, Firstborn).

The place on the site should not be closed from direct sunlight. Its flooding with spring melt waters is undesirable. It is important to prune the plant on time, both sanitary and anti-aging... Particular attention is paid to watering and feeding the bushes, which must contain a sufficient amount of phosphorus and potassium.

After harvest, when the leaves of the currant begin to acquire a reddish tint, they begin autumn preventionto prepare the shrub for wintering and prevent re-infestation. First, the fallen leaves are collected and burned.

The earth is dug up with a seam lapel so that pests, their larvae and pathogenic microorganisms die. Deep digging is carried out within 20 cm. To consolidate the result, the soil is treated with fungicides. When persistent cold weather sets in, it is fertilized with manure. 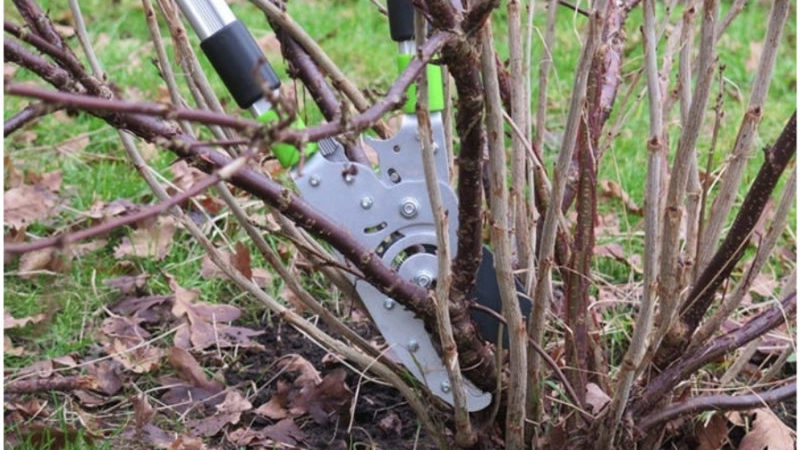 Produce sanitary and anti-aging pruningcutting off dry and old branches, shoots with cracks and lichen with shears. All sections are treated with garden varnish to avoid the laying of eggs by aphids. If pruned correctly, this will lead to an increase in yield, after rain or watering, the plant will dry out faster, and spores that fall on it will not ripen.

After the snow melts around the bushes rake all the garbage and burn it... Removal of organic residues helps to get rid of spores of fungal diseases and harmful insects. Around the currants, the soil is loosened in order to increase the access of oxygen to the roots and ensure adequate nutrition for the plant. This increases the resistance of the shrub to various pests. The soil is treated with a solution of copper sulfate.

If the snow has melted and there is not enough rainfall, it is important not to forget about watering the plant.... It is produced once a week, pouring 3-4 buckets of water under each bush.

In the spring, before the buds swell, to avoid infection with infectious disease and pest attacks, the bushes are sprayed. Scalding plants with hot water is considered a simple and effective method. This procedure eliminates aphid larvae and fungal spores. Chemical treatment is carried out after the appearance of the leaves, but before the formation of flowers.

Before planting currants carefully choose a plant variety, study their strengths and weaknesses, resistance and sensitivity to specific diseases.

You can not plant bushes close to each other: they will create shade and transmit infections quickly. If the plant is originally planted in a damp lowland or shade, it is transferred to an open area in the fall. It is important to thin out shrubs periodically.

To get rid of aphids, garlic, onions, calendula, chamomile and marigolds are planted nearby: insects do not tolerate their strong smell. There should be no herbs next to the currants that aphids can move to, especially nettles and plants of the Lamiaceae family (sage, oregano, mint, lemon balm, thyme, etc.).

To attract insects that feed on aphids (bees, ladybirds, lacewings), meadow grasses are sown near the bushes. At the same time, there should not be anthills near the currants, since it is the ants that carry, or rather, breed aphids.

Gall aphids and anthracnose are among the most common causes of red spots on currant leaves.When the first signs appear, it is important to immediately move on to treating the shrub in order to save the crop and the plant itself. There are many folk remedies and chemicals for this.

To avoid the occurrence of diseases, it is important to carry out preventive measures on time and properly care for the shrub.

Buckwheat: the benefits and harm to health, how the beneficial properties change depending on the type of buckwheat, how to use it, who is contraindicated

Tomato Big Mom: characteristics, yield, photos and reviews of those who tried to grow these tomatoes, description of the variety