Why gooseberries don't have berries and how to fix it

Thorny and thornless, red and green, sour and sweet - all kinds of gooseberry varieties can be found in Russian gardens. The berry has an original taste and useful composition; it is used in cooking, medicine and even cosmetology. In leaving, gooseberries are unpretentious, but sometimes it happens that there are a lot of leaves on the bush, but there is no harvest. Why this is happening and what to do about it, we will consider in the article.

Why there are no berries on gooseberries: reasons

There are many reasons why the bushes do not bear fruit. If you do not diagnose the problem in time and do not start solving it, the plant will die. Therefore, gardeners regularly inspect their plantings and monitor the appearance of plants. 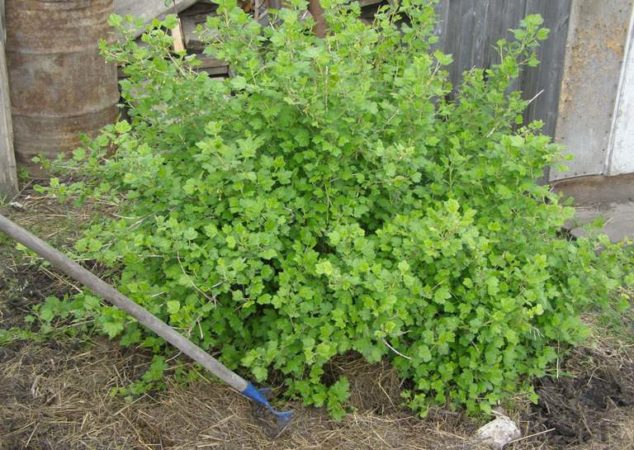 Despite the fact that gooseberry is an unpretentious culture, it needs in regular care... In the spring, agrotechnical measures are aimed at waking up the shrubs and stimulating the movement of sap inside the plant, in the summer - at the development of fruiting, in the fall - at protection from the coming cold weather.

Often, summer residents neglect care measures, which is why by the time of harvesting there are no berries on the bush or there are very few of them.

The following agrotechnical errors lead to this phenomenon:

It is easy to diagnose the lack of watering or dressing - the shoots stop growing, the leaves dry out, the plant becomes lethargic. The same happens if you do not devote time to loosening, weeding and other agrotechnical procedures.

Old age of the bush

The bush is considered old if it bears fruit for more than 7-10 years. Sometimes plants are not cut for 10-12 years. The shoots of such bushes are long, hard, sticking out in different directions. If there are no berries due to age, gardeners recommend thinning the shoots, removing all non-fruiting branches and rejuvenating the plant.

The procedure begins by cutting off broken, weak, insect-damaged branches. Also cut short annual shoots, leaving only 3-5 of the strongest.

Rejuvenating pruning is carried out in early spring, after the start of sap flow. You cannot cut out an entire bush in one year, it will take 2-3 years. If everything is done correctly, after this time, new berries will appear on the plant.

To improve fruiting in late July or early August, pinch the top of the gooseberry. Tips of annual shoots and weak tops are cut off. 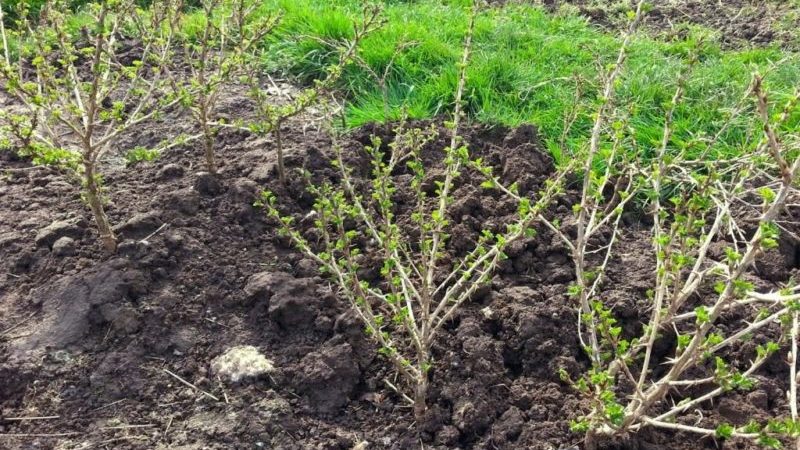 Gooseberry bushes are demanding on the illumination of the garden area, therefore it is advised to grow the berry in a sunny place... Otherwise, the branches grow poorly and do not bear fruit, the foliage acquires a gray-green tint.

Also, there should be no reservoirs and groundwater nearby. Gooseberries do not tolerate constant moisture. Because of this, the berries become smaller, and the plant often suffers from fungal diseases.

It is better to plant gooseberries in light and nutritious soil. The plant is planted in sandy loam soil with a neutral acidity level. Shrub does not tolerate heavy clay soils. If there is no other soil, when planting, purchased soil containing rotted organic matter (manure, bird droppings, peat) and dry wood ash is poured into the pit.

Attention! Suitable neighbors for gooseberries are pears, plums, apples. The root systems of these crops are at different levels, so they do not harm each other. Unfavorable neighborhood - black currant, raspberry or strawberry. 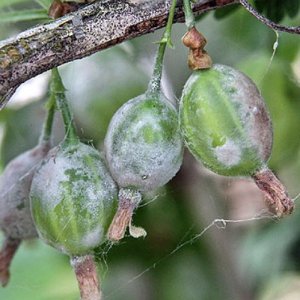 If you do not treat gooseberries, you can not only lose berries, but also lose a whole bush.

The main enemy of the berry is powdery mildew. The fungus occurs in dark and humid places, prefers heavy soil.

Summer residents note among diseases and anthracnose. Small brown spots appear on the leaves, they shimmer and shine in the sun.

Because of anthracnose leaves dry out and fall, the shrub loses its ability to bear fruit. The causes of infection are the lack of potassium and phosphorus in the soil, unfavorable neighborhood, excess or lack of moisture.

Gooseberries also lose crops due to rust. Orange-brown swollen spots appear on the leaves, which become larger over time. If you do not start treatment, the leaves fall off en masse. It is impossible to bring such a plant back to life.

What to do if the gooseberry does not bear fruit

Simple and effective recommendations will help to increase yields and restore the health of the shrub, as well as cope with a situation in which the gooseberry becomes shallow or fatty. 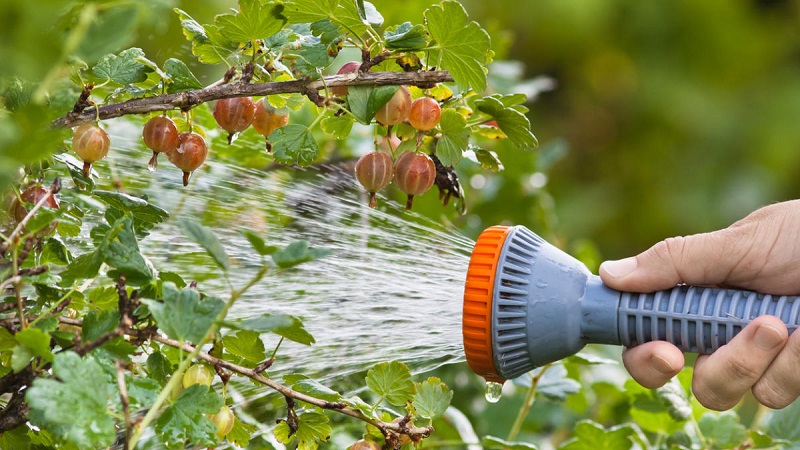 If the gooseberry does not bear fruit due to lack of moisture, summer residents moisten the plant... About 4 buckets of water are spent on an adult bush, on a young one - 2-3... The watering depth is about 40-50 cm. The root system is located at this distance.

Moisten the plant in the early morning or evening after sunset. Before the procedure, the soil is loosened 10 cm in diameter from the base of the bush and the weeds are removed. After watering, the soil is mulched with sawdust or foliage. They retain moisture and increase the evaporation time of water from the surface of the earth.

Attention! Once a week, summer residents pay attention to sprinkling. Water is sprayed in drops over the plant. Sprinkling is especially necessary for shrubs that grow in hot and sunny regions.

Fertilize gooseberries three times per season... In early April, organic fertilizers are applied - a solution of ash or rotted manure. Top dressing is poured into pre-prepared wells 10 cm deep. During the period when the gooseberry begins to bloom, potassium sulfate or double superphosphate is added. 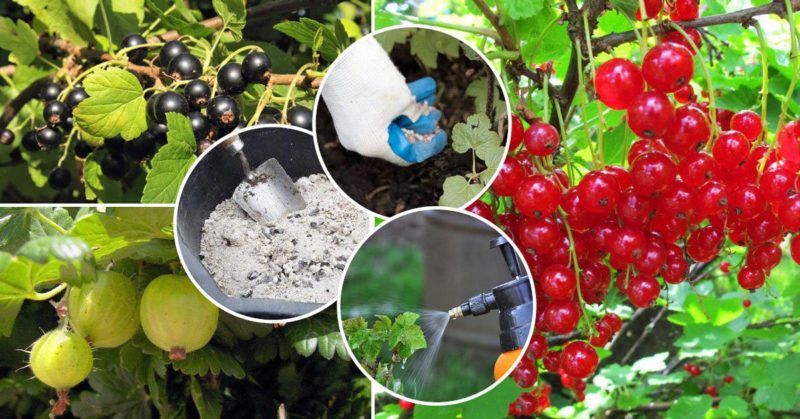 The last time the plant is fertilized is in August - it is sprayed with soap and garlic solution. 150 g of chopped garlic is poured into 10 liters of water, infused for 3 days and filtered. Then add 50 g of grated laundry soap and dilute with water in a ratio of 1:10.

If the gooseberry is overgrown, rejuvenating and shaping pruning is performed... Gardeners cut perennial (skeletal) branches in half and prune all root growth. A sharp pruner or scissors is used, the places of the cuts are treated with garden pitch.Gloves are worn during trimming to protect against spikes. 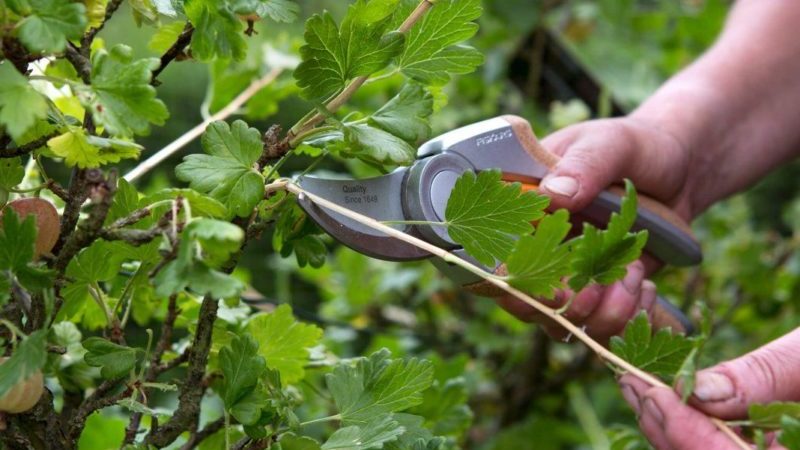 Starting from the age of 4, all dry and weak branches are cut out - they do not allow the fruits to develop and take away some of the nutrients.

To keep the crown well-groomed and neat, it is recommended to prune once a year in spring, summer or autumn, depending on the variety, growing region and plant characteristics. Pruning not only guarantees a rich harvest, but also protects against diseases and pests.

Shelter for the winter 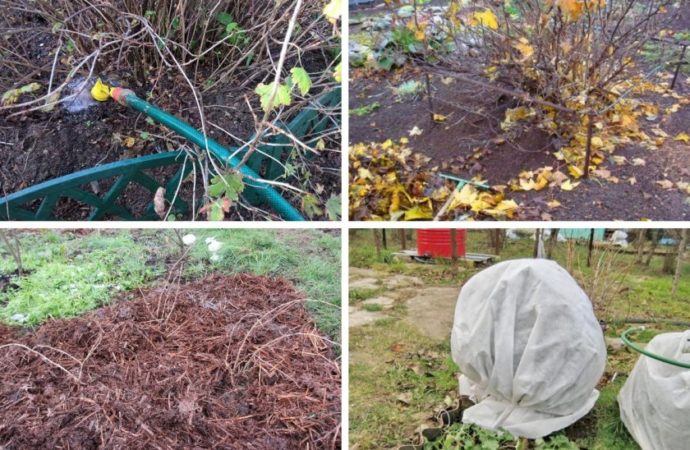 If the gooseberries are not covered for the winter, they will freeze. For protection, gardeners form a cushion of loose soil by laying soil around the base of the plant. The earth is watered with a solution of potassium permanganate, cleaned of bindweed and other weeds, and fallen leaves are removed. The plant is mulched with peat or humus with a layer of no more than 10 cm.

If there is snow, sprinkle the gooseberry with a snow pillow. If there is little precipitation, use a special covering material, for example, agrospan. It reliably protects against wind and frost, while being breathable.

Agrospan is removed in the spring, as soon as the first snow melts. If they did not have time to cover the gooseberries, and the frost has already come, the water under the bush is moistened with water.

Attention! Ordinary film will save the gooseberries from severe cold weather. The main thing is to remove it for the day and use it for shelter only at night. Otherwise, the gooseberry will rot, which will lead to the development of diseases.

Treatment and prevention of diseases and pests 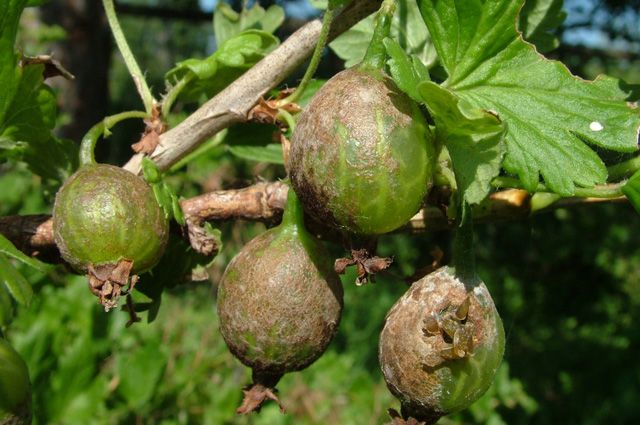 The classic way to prevent and treat diseases and pests- spraying with a solution of wood ash. Cooking requires 3 liters of water and 1 kg of dry ash. The tool copes with anthracnose, aphids, powdery mildew. The shrub is processed in the morning before sunrise. Also, the infusion is used once a month instead of water for irrigation. It prevents root diseases and strengthens the immune system.

The preparations contain fast-acting and effective components that are harmless to the environment. However, when using them, it is important to follow safety rules - prepare glasses, gloves, and a respirator. A solution of soda will help prevent the appearance of diseases - 5 g of baking soda is dissolved in 1 liter of water and used for watering.

To understand why gooseberries do not have berries, you need to study the appearance of the bush. Orange swollen spots indicate rust damage, white bloom - powdery mildew, dry leaves and shoots - about a lack of moisture or trace elements.

The sooner the summer resident understands the reason for the poor yield, the better. In order to prevent such a phenomenon and grow a good harvest, gardeners carefully choose a planting site, take care of the plant and regularly carry out preventive measures.

Does buckwheat help you lose weight or vice versa: useful properties, which cereal is better, I eat buckwheat and don't lose weight - why

Grape varieties for cultivation in the Leningrad region - planting, pruning and care, the best non-covering varieties

Feed oats: what is it and a photo of grain, characteristics and description of the variety

What to do if gooseberry berries are covered with a brown coating, how to save the harvest

Gooseberry diseases and their treatment

How gooseberries reproduce - all ways