How does pomegranate grow, where is it grown and when it ripens

In the East, the pomegranate is called the royal fruit for its excellent taste and beautiful appearance. One fruit contains most of the nutrients needed by the human body. In folk medicine, pomegranate seeds and peels are used to treat anemia, dysentery, gastrointestinal tract disorders and other diseases.

Pomegranate trees are grown commercially in many countries and cities with subtropical climates. Trees are demanding on the climate, but unpretentious in care. Where pomegranate is grown, how it grows in nature and when the fruits ripen - read on.

Description and characteristics of the grenade 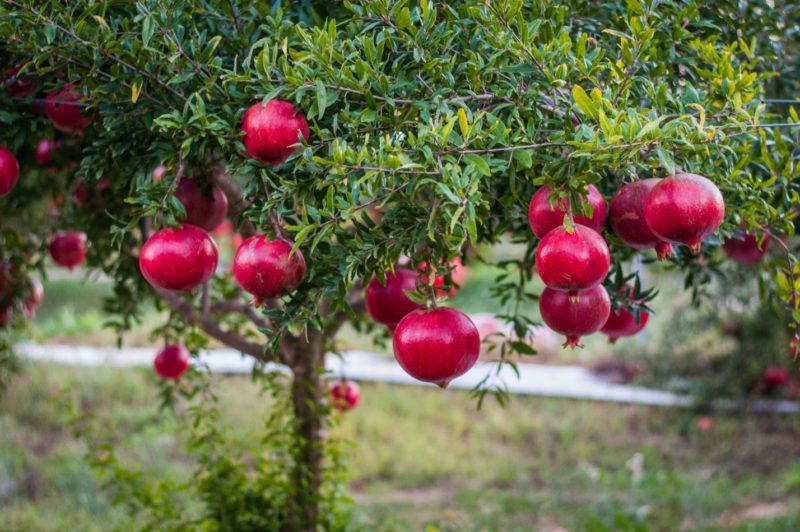 Pomegranate is a long-lived plant from the Derbennikov family, the Pomegranate genus. On average, it actively grows and bears fruit for about 100 years. In nature, there are trees about 300 years old.

When grown commercially, every 50-60 years pomegranate landing cut down and replaced with new plants, since by this time the crop yield decreases.

It is interesting! During the Middle Ages, pomegranates were called Pomum granatus, which translates as "seed apple". In ancient Rome, the plant was called Malum granatus - "granular apple". Later K. Linnaeus gave the culture an official name - Punica granatus, which translates as "granular Punic". The name of the pomegranate is still translated from Italian and German as "apple".

For comfortable growth, pomegranate trees need a subtropical climate. The plant is able to withstand cold snaps down to -15 ° C, and at temperatures of -20 ° C and below, its entire aerial part freezes over.

The plant is light-requiring, therefore it is planted in open areas. For fruits to be large and sweet, they must be shaded with leaves. This is taken into account when forming the crown of the culture.

Pomegranate is not picky about the composition of the soil. It can grow even on sandy and saline soils.

The plant is hardy, famous for its insomnia. If the trunk and branches of the tree are completely covered with sand, it will put down new adventitious roots, and the old root system will gradually dry out. This is proved by the pomegranate cemetery with multiple rooting of tiers along the trunk, found near the Ganja-Gai River.

Pomegranates are not picky about watering and moisture. It tolerates drought well. However, to improve fruiting, it is recommended to spray the crown. On dry days, the soil is periodically moistened.

Like all cultivated plants, pomegranate is susceptible to disease and pest attacks. Most often it is affected by Phomopsis (branch cancer) and sooty fungus. Of the pests, the most common problem is considered to be the pomegranate mite, clove roll, corrosive arboretum, pomegranate moth, and aphids.

Breeders are constantly developing new varieties of pomegranate with increased resistance. When grown on an industrial scale, the problem is fought with chemicals.

Pomegranate is not only a source of tasty and useful fruits... Trees look aesthetically pleasing during flowering and fruiting periods.

Cultivated varieties are usually grown in the form of a tree with a height of 3-6 cm. In the wild, the type of plant depends on the conditions and method of formation, in mountainous areas and with a lack of soil, pomegranate grows like a shrub.

Pomegranate branches are slender but flexible and tough, capable of withstanding heavy fruit. They have thorns.The closer the plant is to wild form, the longer and sharper the thorns on the branches.

Leaves are opposite, elongated, pointed on 2 sides, glossy, bright green. The maximum length is 8 cm, and the width is 2 cm. In the tropics it grows like an evergreen tree, and in countries with cold winters, when frost occurs, it sheds its leaves.

Flowers 2 types. Bell-shaped specimens are sterile. They do not have ovaries and fall off after the flowering plant. There are most of such flowers on the tree. Pitcher-shaped specimens are bisexual and have a noticeable ovary at the base. It is from them that the fruits are formed.

There are flowers of intermediate forms. In fruit pomegranate, they are red-orange, simple, have a leathery calyx with 5-7 pointed lobes. It contains thin, delicate petals, stamens and a column with a thickened lobed stigma. In decorative plant varieties, flowers can be simple and double, red, pink, white and variegated shades.

Fruits are spherical in shape, with a preserved corona-shaped leathery pericarp. The scientific name of pomegranate berries is pomegranate... A tough peel that reliably protects the pulp from damage can be red (the most common option), yellow, orange, brown, brown. It is inedible, but it is actively used in medicine and cosmetology.

Under the skin are numerous pomegranate grains, which are seeds surrounded by juicy pulp. It comes in dark and light red, pink or yellow. It tastes sour, sweet, sweet and sour.

The bones are numerous. Their number can reach 1200. They are located in 6-13 chambers, separated by a dense cream-colored film. The bones can be hard or soft. Reproduction is possible in a generative way.

It is interesting! About 60 kg of fruits are harvested from one pomegranate tree per season.

Scientists believe that pomegranate is an ancient culture that is at least 4 millennia old. It is believed that the fruits of the plant used for food ancient people of the stone age.

Persia (modern Iran) is considered the historical homeland of culture. Also in ancient times, the plant was distributed in the wild in Carthage (modern Tunisia), Afghanistan, Turkey, Transcaucasia, Central Asia.

Pomegranate trees have been cultivated since antiquity and are common throughout the Mediterranean. Culture was brought to America during the time of the Spanish conquistadors. Later, the plant spread to all countries and cities with a subtropical climate.

Pomegranate was especially revered in Greece. It was sung by poets, and the best warriors were rewarded with golden fruits. The grainy apple is mentioned in the Old Testament.

It is interesting! Some peoples believe that it was the pomegranate that was the apple that seduced Eve in the Garden of Eden.

How the wild pomegranate grows 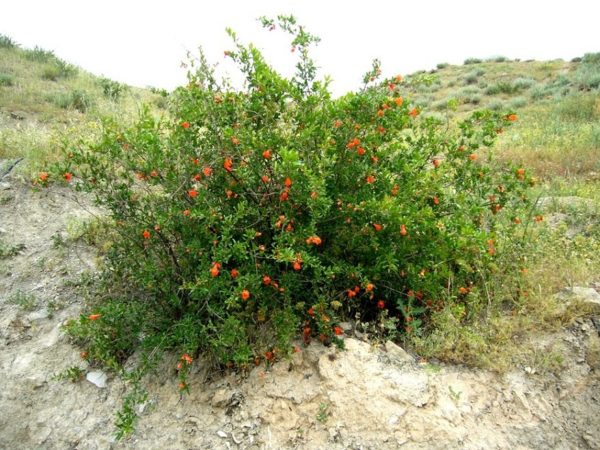 Thickets of wild pomegranate are most often found along the ridges, near mountain rivers, on rocky, sandy and pebble-alluvial soils.

In favorable conditions, the plant grows into a tall tree. On the mountain slopes it becomes a bush. The more favorable the conditions for growth, the higher the culture.

The fruits of the wild pomegranate are smaller than the cultivated one. They have a sweet and sour tart taste. The rind is bright red or orange with light spots. The grains are light red. The seeds are tough.

Countries where pomegranate grows have a mild subtropical climate. The plant is found both wild and cultivated.

The northern border of the area affects the Asian countries of the former USSR, the Greater Caucasus Range, the coast of the Caspian Sea. The western limits touch the coast of Asia Minor. The southern borders reach the shores of the Arabian Sea.

In Russia, there is also a cultural pomegranate: in North Ossetia, Crimea, Dagestan, Krasnodar Territory, Sochi.

When asked if pomegranates grow in Abkhazia, the answer is yes.

Where the most delicious pomegranate grows 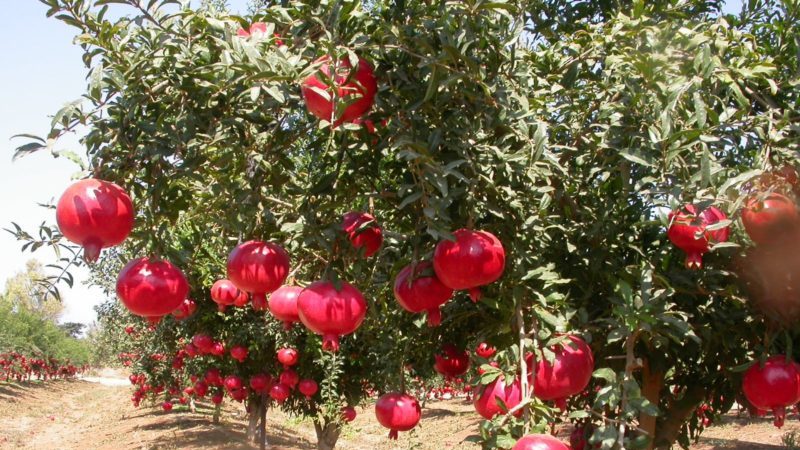 There is no unequivocal answer to the question of where the most delicious pomegranate grows. Residents of different countries have different opinions on this matter.

Azerbaijani pomegranate is famous for its high taste characteristics... In Azerbaijan, in the city of Goychay, a festival of pomegranate fruits is traditionally held. And it is the Goychay pomegranate that enjoys the greatest love of the country's inhabitants.

It is also widely believed that the most delicious pomegranate grows in Iran, the historical homeland of culture. The Greeks, for whom Tunisia was the center of the most valuable grainy apples, will not agree with this statement.

Note! The taste of the fruit is influenced not by how and where the pomegranate grows, but by the variety of a particular plant. There are sweet, sour, and sweet and sour varieties. Also, fruits that grow in favorable conditions, on fertile soil and ripen at a temperature of + 25 ° C, have the best taste.

Zoning of pomegranates by types and varieties

There are only 3 types of pomegranate in the world:

The taste of the fruit is largely influenced by the variety. The list contains the main varieties of pomegranate and the countries in which they are grown:

The most popular decorative varieties are Multiplex, Chico, Variegata. They do not bear fruit, but they bloom beautifully.

When the pomegranate ripens 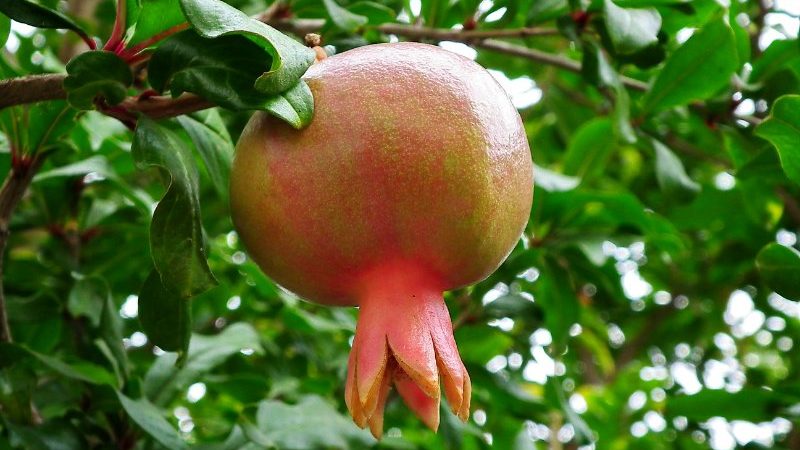 The first harvest of pomegranate is harvested when the plant is 3-4 years old. If the tree was propagated vegetatively, then already in the second year. After that, the tree continues to bear fruit for over 100 years, but the highest yields are observed in the first 55-60 years.

The growing season lasts from 6 to 8 months. The culture will have a prolonged season of flowering, fruiting and fruit ripening. From formation to full maturation, it takes 4 to 5 months.

In hot countries, when pomegranate ripens, it cracks right on the branches, if they did not manage to remove it from the tree earlier, but the grains do not spill out. Such fruits are not suitable for transportation, but they have a rich taste, so they are happy to use local residents.

In countries with colder climates, the leaves partially fall off during the ripening of pomegranates. Large bright fruits on bare branches look especially unusual.

Ripening season of pomegranates, depending on the place of growth: 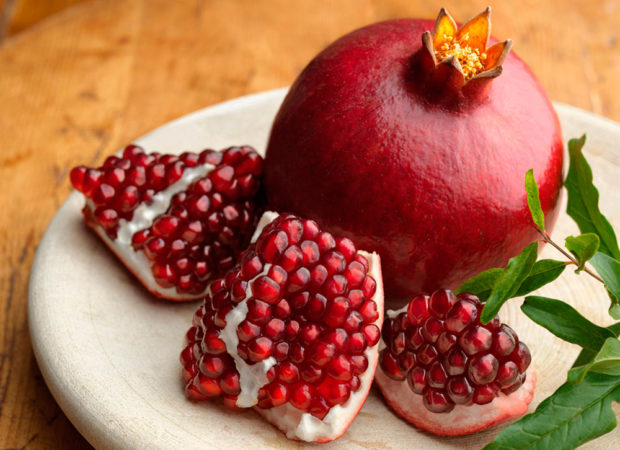 If you pick an unripe pomegranate, it will ripen at home. However, the taste of such fruits will be worse than those ripened on the tree. Therefore, fully ripe pomegranates are usually harvested by cutting them off the branches with a pruner. Stored harvest more than 3 months.

How to identify a ripe pomegranate fruit:

The pomegranate has spread to all corners of our planet with a suitable subtropical climate. It can be found even in the southern cities of Russia. After all, an exotic tree easily survives frosts down to -15 ° C and does not discard fruits even in late autumn.

The ripening time of the grant depends on the growing area and variety. However, the main harvesting season runs from late September to November.

Where is it better to plant gooseberries on the site: in the sun or in the shade, with which plants you can plant, and with which you cannot

Growing and caring for peas in the open field and in a greenhouse in the country: how and when to plant seeds, technology and seedlings

We solve problems with the tomato harvest: what to do if the tomatoes in the greenhouse do not turn red
Popular articles

The benefits and harms of pomegranate for the health of women, men and children

How to properly prune pomegranates in the garden and at home

Useful properties of pomegranate peels and how to use them

Pomegranate - norms of consumption per day, is it possible to eat with seeds