How to properly cut the leaves of cucumbers in the greenhouse and should it be done?

Many people dream of a rich harvest, but not everyone knows that one of the ways to increase the yield of a cucumber crop is to prune the leaves. Why and how to do this procedure correctly - we will tell you in more detail.

Pruning leaves and shrub formation - an expedient and effective procedure to improve the quality of the crop. With the uncontrolled growth of the plant, many barren flowers (male inflorescences) are formed, the cucumber vine begins to branch, making care difficult. 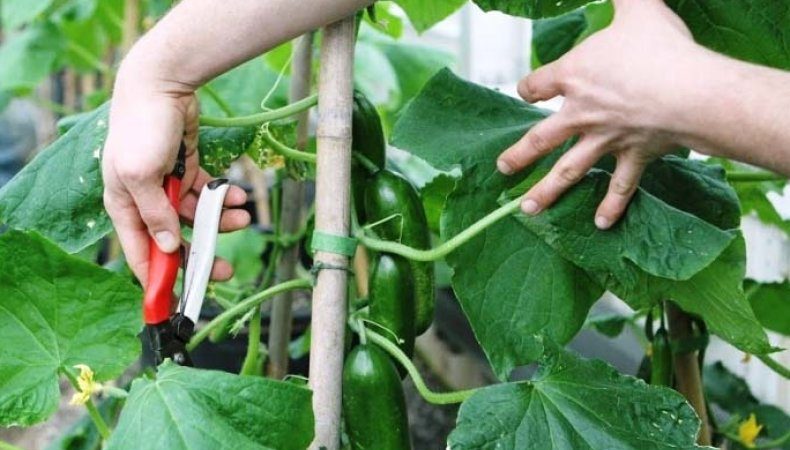 Pruning the leaves increases the yield and taste of the fruit, because the plant does not expend energy on growing lashes:

Cutting off excess leaves reduces the density of the bushes - the plant receives more light and better ventilation, which reduces the likelihood of fungal diseases.

The choice of the method of forming a cucumber bush depends on the method of pollination of the variety (parthenocarpic and bee-pollinated), the timing of ripening (early ripening, mid-ripening, late-ripening), the method of planting (ordinary, checkerboard) and the garter (vertical, horizontal or net).

Reference. When growing cucumbers in greenhouses, the bush is formed into one stem, in the open field - in two or three lashes.

The main principles of pruning in a greenhouse

Saplings in the greenhouse quickly build up vegetative mass - stems, leaves, inflorescences and ovaries. Nutrients are evenly distributed throughout the lash - cutting off excess shoots and leaves contributes to better nutrition of the ovaries. 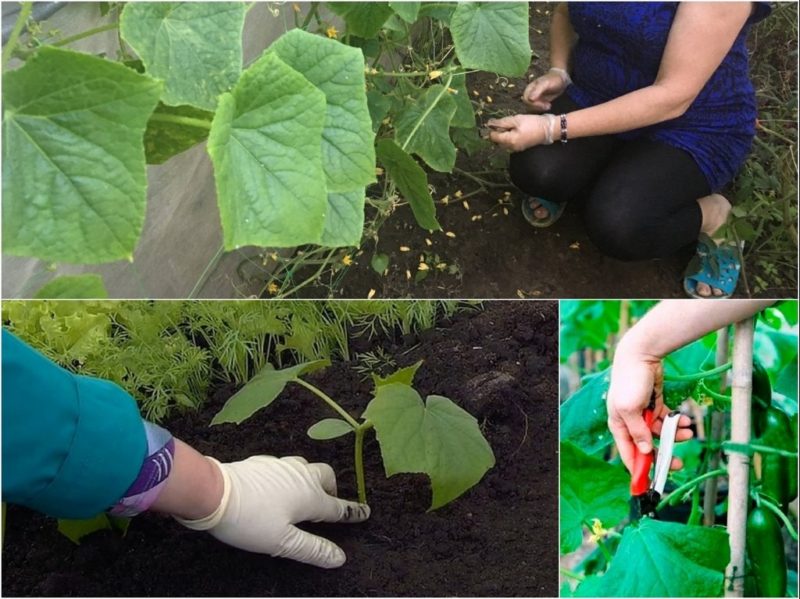 For any manipulations with the plant, the central stem is carefully handled - if it is damaged, the plant dies.

There are no exact dates for the formation of bushes, but it is believed that the best period for this comes three weeks after planting the seedlings in the greenhouse, when the cucumber vine reaches a length of 50 cm.Do not delay pruning - this leads to stretching and entanglement of the shoots.

If the bush quickly went into unregulated growth, the lateral shoots are cut off, which have grown to a length of 5-6 cm - in this case, pinching is safe for the central stems and is easily tolerated by the plant.

Methods for tying bushes before molding 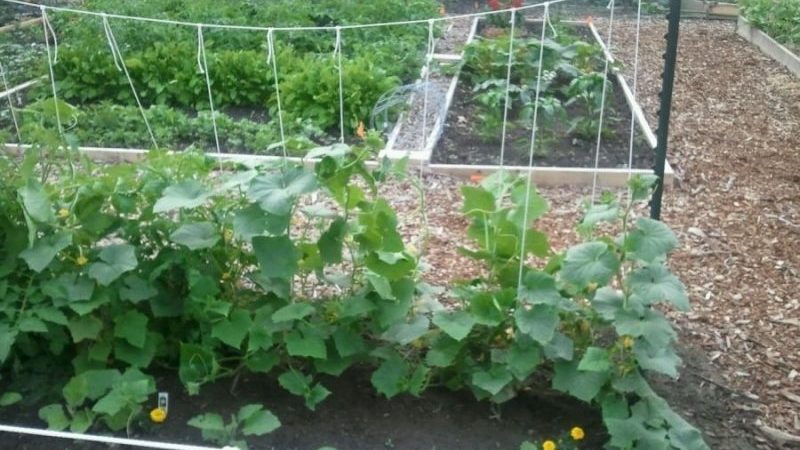 Garter - this is the fixation and direction of the cucumber vine along the guiding element. In a tied plant, it is easy to identify the main stem and lateral processes.

The garter of cucumbers is done when 4-6 leaves are formed on the lash, and the plant itself grows more than 30 cm long. For the garter, a special structure is built that will help the bush to form and free up space in the garden.

It is not recommended to use thin wire for garters - it can injure plants.

There are several methods garter cucumber - let's consider each in more detail.

This method is convenient because each plant will have an individual support along which it can curl:

This method is used in open ground or low greenhouses:

The disadvantage of this method is that as soon as the cucumber lash reaches the upper level, it will no longer be able to continue its further rise and will begin to hang down, shading the lower part of the plant and interfering with caring for the bush. 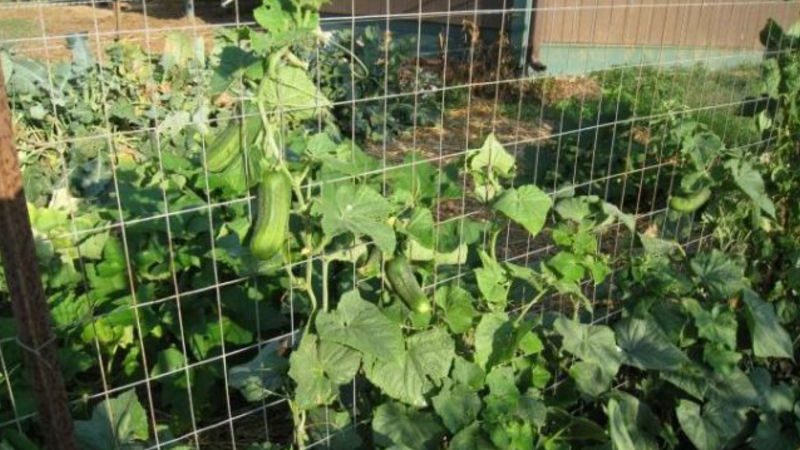 The stores offer a large selection of nets for weaving plants - they are conveniently mounted, have large cells and are made of durable non-rotting materials:

The lashes are tied loosely, without tension, so as not to pull the plant out of the ground. The top is left free, otherwise the plant will begin to turn yellow and wither.

The choice of pruning scheme depends on the group of cucumber varieties. 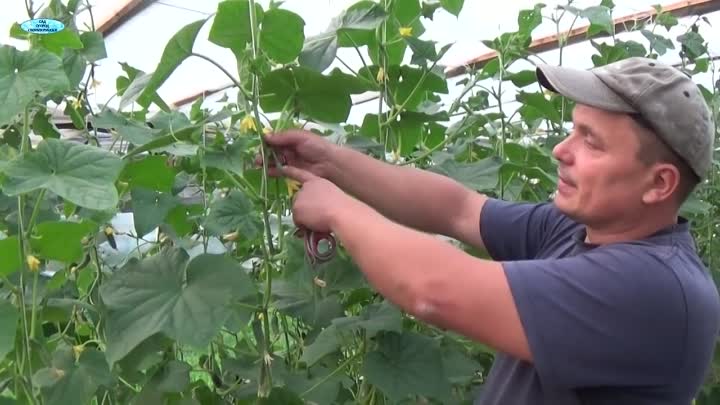 Parthenocarpic cucumbers are hybrids that produce fruits without pollination. About a third of the crop is tied on the central stem, the rest are formed on the lateral shoots.

Cutting leaves and shoots is done in this order:

Topping Is the shortening of the shoot length.

Bee-pollinated varieties form ovaries only after pollination, so they are planted in open greenhouses. Experts recommend making the formation of a bush in one stem, as is the case with parthenocarpics.

The ovaries of bee-pollinated varieties are formed on the lateral shoots - pruning is carried out in a gentle way.

Trimming brown, yellow, damaged and dried leaves is carried out at any time, regardless of the growth of the cucumber lash.

How to prune cucumbers correctly

When trimming the lashes, they try not to change the position of the shoots and leaves so as not to break off the necessary shoots.

Is it possible to pick off the first leaves

For a young plant, cutting off the first leaves can negatively affect the yield - in the phase of formation of 3-4 true leaves, the entire mass of flowers of the future harvest is laid.

Is it necessary to remove cotyledon buds

One elongated cotyledon leaf is formed at the very beginning of seedling growth, it grows for about a week. As the plant grows, it ceases to need a cotyledon leaf, it dries up and disappears.

It is not recommended to remove the cotyledons, the leaf is important for the growth of the seedling - sometimes the plant dies due to the breakage of the cotyledon leaf.

The lower leaves are removed only from healthy and lush plants - if there is little greenery on the bush, pruning the lower leaves can destroy the plant.

The lower leaves are cut at a distance of 20-25 cm from the ground - excessive moisture in the soil and the likelihood of fungus or root rot are reduced.

Do I need to pick the first flowers

Experienced gardeners recommend removing some of the male barren flowers so that the plant does not waste energy on their growth - they leave 1-2 male flowers on the lash.

Female flowers are never cut off - ovaries are formed from them.

Whether to remove the first ovaries

The first ovaries in the lower part of the bush develop very slowly. Experts advise removing them and leaving only those ovaries that have formed at a height of 80-90 cm - after removing the first ovaries, the plant will direct the liberated forces to the development of the stem and root system.

What shoots are recommended to cut for a good harvest

Pruning leaves during the formation of bushes is necessary - the plant develops better, its yield increases: excess tops do not take nutrients that go to the formation of fruits; the sun's rays evenly illuminate the cucumber vine, improving the process of photosynthesis; the risk of illness is reduced due to good air circulation.

Correct and timely pruning of leaves and shoots is an important stage in plant care - a generous harvest of cucumbers will be a worthy reward for hard work.

Top dressing of winter wheat in spring: UAN, saltpeter, timing and application rates, how to feed in spring at the beginning of earing and early spring

Melon for the winter you will lick your fingers: recipes for harvesting fruits (conservation, cooking compotes and jams, candied fruits, etc.)

What is useful for feeding cucumbers in a greenhouse with yeast, how to cook and use it correctly