Aphids on tomatoes: how to deal with flowering and what means to choose for processing tomatoes

Get delicious ripe on the table tomatoes from the garden is the task of many summer residents. But this requires a lot of work, and it is sometimes difficult to protect plants from diseases and pests. Inexperienced gardeners may not even understand that tomatoes are sick and do not take timely measures. How to identify aphid infestation and effectively deal with it - let's talk about this in detail.

This small pest belongs to the insect kingdom, the suborder of Hemiptera. A distinctive feature is a specially arranged oral apparatus, which is a piercing-sucking proboscis.

In total, there are about 4,000 species of these insects in the world. They are winged and wingless, capable of same-sex reproduction and the so-called viral reproduction on the body of the "host".

It feeds on aphid plant sap, deeply digging its proboscis into its "body". Insects not only suck sap, settling on leaves and stems in whole colonies, but also carry viruses. At the places of their settlements, fungal formations appear, which are destructive for garden and vegetable garden crops.

During the summer, the insect leaves behind three generations of larvae, which only do what they “milk” the plants. Having sucked the juice from one, they move on to the next, so if timely measures are not taken, aphids can ruin the entire crop. 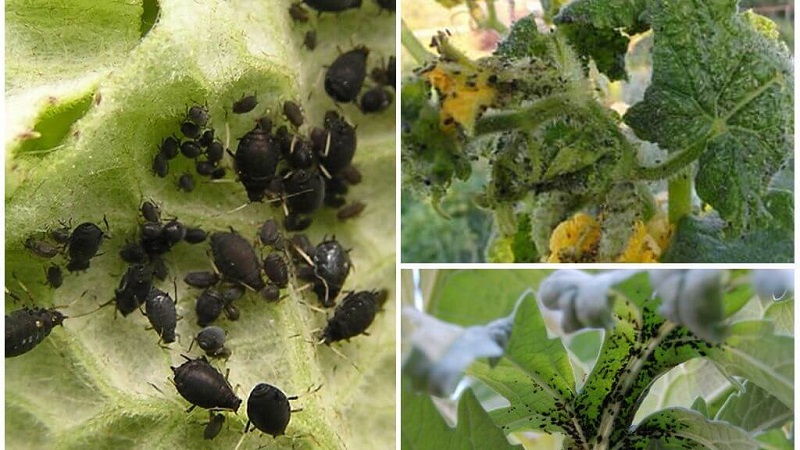 Insects do not like the fragrant greens of tomatoes, but they can also attack them in case of lack of nutrition for their offspring. Black, white, tomato, melon aphids grow on tomatoes. You can understand that a culture is infected by external signs.

Since insect colonies stick around the entire lower part of the leaves, soon their edges begin to deform, curl, and dry out. If the plant is affected, black and white aphids are visible on the stems as a black or mealy bloom.

Another indicator of the presence of aphids is sticky shiny spots on the leaves and fruits. This is the so-called honeydew - a sweetish liquid secreted by aphids. It falls from the bottom of the leaf to the front side or fruit and is baked in the sun. Ants, constant allies of aphids, appreciate such a high-calorie product. They tickle the aphids with their paws, and she gives them a drop of her sweetness. Ants take care of their nurses, so they often transfer them from one plant to another by themselves.

If you see such signs on the beds, this is a signal that you need to save the plants.

How to deal with aphids on tomatoes: the best methods

The use of certain methods in the fight against aphids directly depends on how far it has advanced in the destruction of tomatoes, as well as on the stage of plant growth. After evaluating the available signs of tomato damage, prepare a plan for how to process tomatoes, and how to get rid of an annoying pest.

Chemical protection methods are used only up to the stage of plant flowering and if insect reproduction has become total.

Important to remember! Processing with chemicals is harmful to tomatoes and the person himself, be careful in their use.

Chemical agents affect insects in different ways: through simple contact with aphids with a chemical, intestinal penetration, respiratory organs. There are also drugs that, being absorbed by the root system, penetrate the plant's body and make it poisonous to pests. There are many different chemical preparations on the market in the form of powder, tablets, solutions. You need to choose the one that is relevant to your problem.

The most popular of the chemicals:

During processing with chemicals, safety rules must be observed. It is necessary to spray the preparations on the leaves of plants with rubber gloves, a respirator and glasses. Strictly follow the instructions for the drug. Most chemicals are addictive to insects, so they are not used more than 2 times per season. 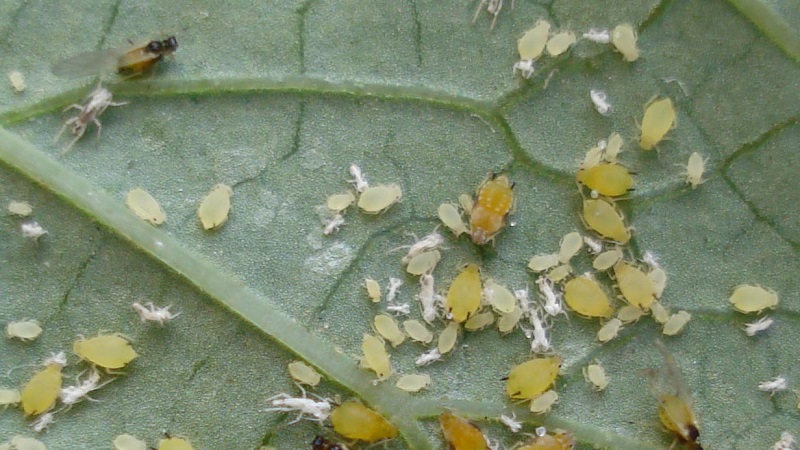 Such techniques include all actions to create such conditions so that the aphid does not feel at ease in the garden plot. So, for example, having broken flower beds of amaranths, marigolds, daisies in a garden plot, you will attract insects that are always ready to feast on aphids: ladybirds, praying mantises, wasps, hoverflies, lacewings, flies. By attracting birds to your garden, you will also reduce the aphid population on your tomatoes. Tits, robins, sparrows will not refuse such easy prey.

You can significantly reduce the number of aphids by getting rid of ants, since it is ants that transfer aphids to plants. They protect their breadwinners and protect them, transfer wingless individuals to new "pastures". And when the aphids suck the juice, the ants "milk" it, collecting sweet secretions. If the ants are cut off from the planting area, their wingless friends will also disappear. To fight ants there is a powder - "Delicia", which is sprinkled on anthills.

Many gardeners prefer to use methods widely used by the people, because they do not harm the plant. However, they will be effective if you regularly inspect the seedlings for aphids and if you find them, you immediately take action.

For spraying tomato plantings use: 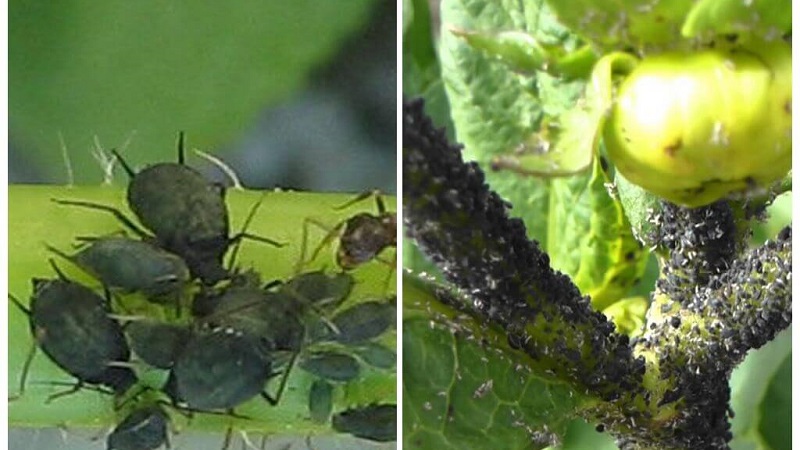 Mechanical methods for the destruction of aphids on tomatoes

Most summer residents avoid chemicals. If there is neither soap nor ash at hand, one of the most effective methods is used - picking up aphids from the branches of bushes by hand. It is tedious, it must be applied regularly and it is better to alternate with folk methods of spraying bushes with soapy water or ash.

Washing off insects from the bush with a stream of water is also an option, but short-term.

If the aphid has chosen the tops of the bushes, they get rid of it by cutting off the upper branches. The cut parts of the plants are burned.

What methods to choose depending on the growth period

The use of control methods should proceed from the stage of development of the plant.

Seedling requires non-aggressive methods: young leaves and stems have fluff, touching which, you can harm the plant itself.

The question that worries every summer resident is how to deal with aphids on tomatoes during flowering? There is only one answer - do not use chemicals during this period, so harm the plant itself and the insects that spread pollen.

During fruiting, in the presence of a large population of aphids, mechanical and folk remedies are usually powerless. Chemicals are needed that are less harmful to crops and health. A product like Fitoverm is made on an organic basis, therefore it does not cause much harm: the fruits can be harvested a few days after processing. 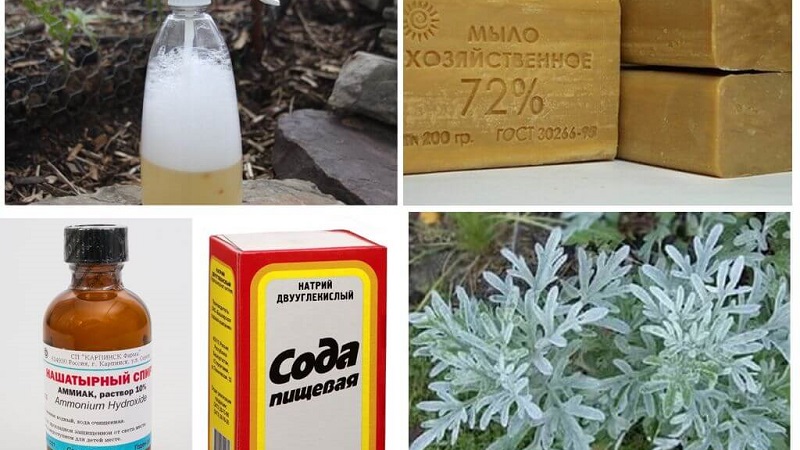 If the appropriate measures are not taken, aphids in greenhouses can multiply as rapidly as in open ground.

It is necessary to create conditions that are uncomfortable for aphids:

If the aphid is started, all methods recommended for open ground are applicable to it. From biological means, the installation of ladybirds in a greenhouse and fumigation with tobacco smoke with tightly closed doors works effectively. The most popular chemical agents in greenhouses are Fitoverm, Entobacterin, Biotlin. 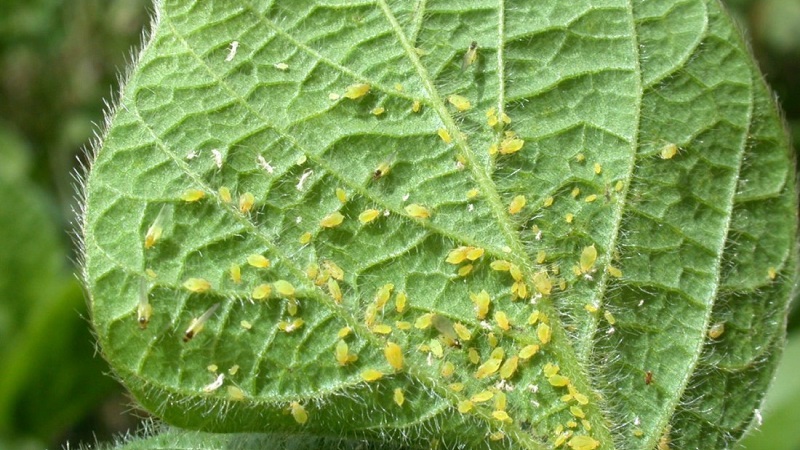 The use of products for open ground directly depends on the reproduction of pests. Gardeners should always be on the lookout: aphids are not particularly picky about where to live.

If in one year she is indifferent to tomatoes, then the next she can settle there. According to gardeners and gardeners, soap solution and ash are recognized as the best folk remedies. From chemical - green soap, "Inta-Vir", "Fitoverm", the drug "Oberon" used at the initial stage of aphid infection.

Prevention of the appearance of aphids on tomatoes

To prevent the appearance of aphids in a summer cottage, the following measures must be taken: 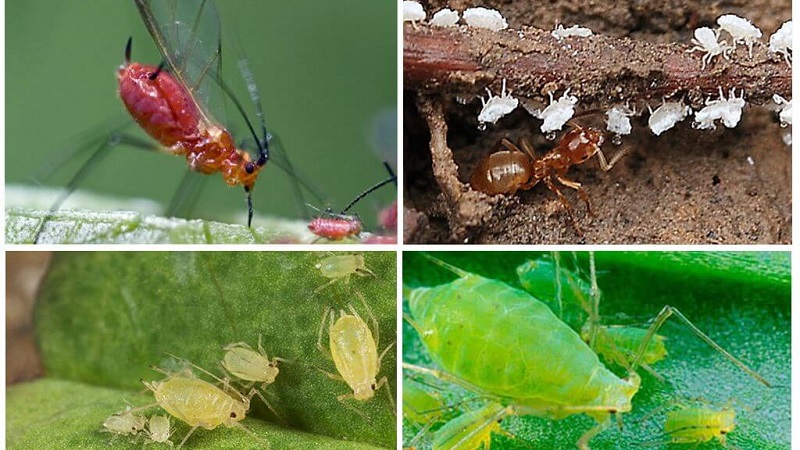 Inexperienced gardeners often do not pay attention to signals that aphids have started up on the site, and therefore precious time for a quick response is lost, and pests are thriving in the garden.

Signs preceding the invasion of aphids:

Inspection of plants should be done several times a week, looking under the leaves of plantings, because this is a favorite breeding ground for aphids. The faster you react and apply one of the above methods, the more effective will be the measures for the destruction of aphids.

To effectively exterminate pests, while not harming beneficial insects, the following recommendations will help: 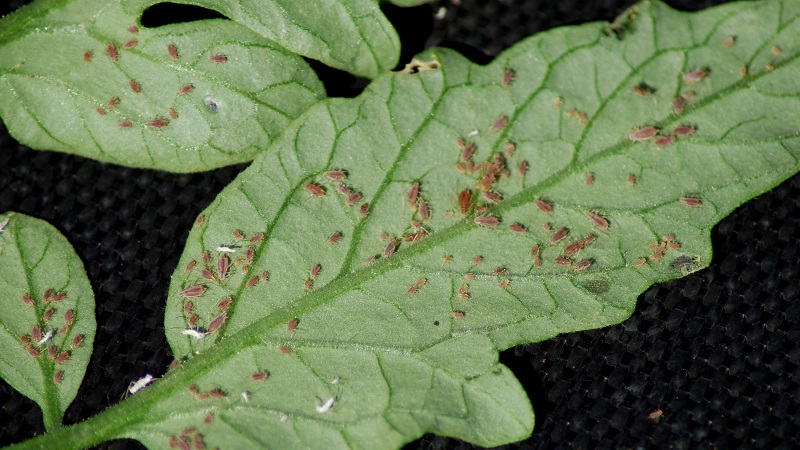 If you pay attention to the appearance of aphids on tomatoes in time, you can get rid of them without resorting to chemicals. Means such as soapy water, ash, garden spices, ladybugs, and golden eyes help. But if the infection has become a disaster, it is better to turn to effective broad-spectrum drugs.

When engaging in the fight against aphids, you also need to take measures to exterminate ants in the summer cottage, because they help aphids find new shoots.

Clementines and tangerines: the difference between them, what are the differences, description of the variety, how it differs, calorie content, which is more useful

Spraying tomatoes with serum with iodine: recipe and proportions of the solution, how to properly process tomatoes