The appearance of spots on tomatoes is an alarming signal about the development of a disease or other negative changes that adversely affect the health of the seedling. In no case should you miss this moment: if at least one suspicious spot is found, you need to carefully examine all the seedlings, identify the cause of its formation and start treatment.

Only in this case it is possible not only to save tomatoes, but also to increase the amount of the harvest. In the article we will talk about the causes of the appearance of spots, their types, how to get rid of them and what preventive measures should be taken.

Why do spots appear on the leaves and fruits of tomatoes

There are several reasons for the appearance of stains on the foliage and fruits of tomatoes. The most common is the development of a disease to which tomatoes are most susceptible... Most often, spots begin to appear in mid-summer or towards the end of fruiting. 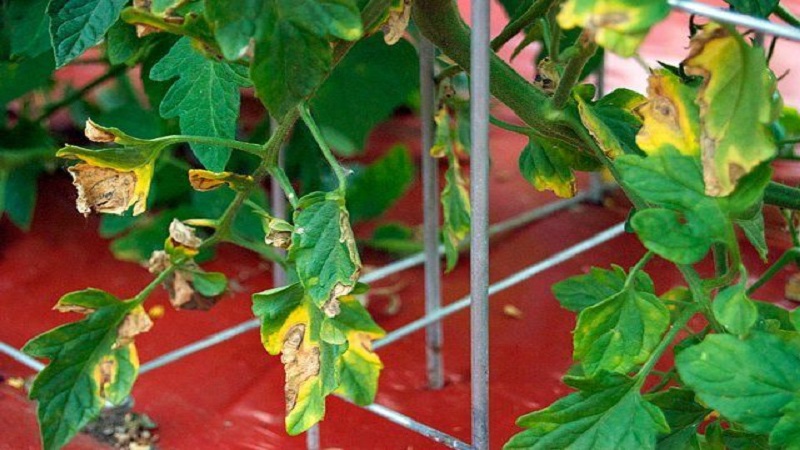 The reason for this is in temperature jumps: hot and dry weather prevails during the day, cool in the evening, foggy in the morning, as a result of this dew appears on the foliage of tomatoes. Temperature changes can lead to the development of a fungal disease, in which spots appear on the plant.

They can appear with an excess or lack of useful trace elements, with improper care of the seedlings.

What does the appearance of the stains indicate?

By the appearance of the spots, they determine what disease the plant is affected by and what exactly provoked their formation. Let's consider in detail the common options. 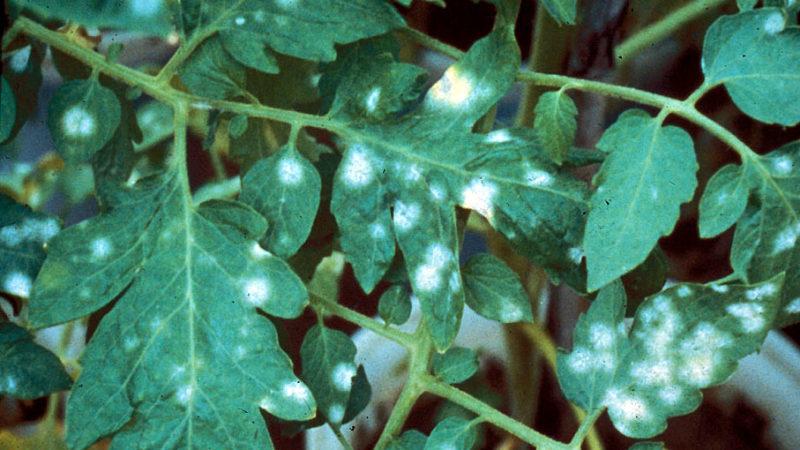 If you plant seedlings in the heat, in the scorching sun, then the tomatoes will get burned. It manifests itself in the form of light yellow spots on the foliage, which subsequently dries up and falls off. Initially, spots are located along the edge of the leaves, but after a while they can cover their entire area.

Tomato foliage may develop silvery spots. Many gardeners who are faced with this phenomenon for the first time are alarmed. The formation of these spots is not caused by a disease, they appear with sudden changes in temperature and due to a violation of the physiological development of the plant, and the reason for this is the insufficient study of the qualitative characteristics of the hybrids before the release of seeds for sale.

If tomatoes are deficient in nitrogenthen their foliage begins to turn yellow dry up and eventually fall off. After some time, the plant stretches out, becomes covered with yellow spots, and the stem becomes soft, the veins on the leaf turn red-bluish.

With potassium deficiency tomato leaves turn yellow, curl up with a tube and begin to dry out at the edges. Their color becomes darker, yellow-brown spots appear, which become larger over time and form a border.

With a lack of phosphorus purple spots appear on the leaves of tomatoes. At first, the stems and foliage of tomatoes turn dark green, and the old leaves on the back take on a purple hue. The roots of the plant wither, the foliage curls, and the stem becomes tough and brittle. After a while, the leaves curl upward and press tightly against the stem.

Possible diseases depending on the types of stains

By the type and color of the spots, you can determine what disease the tomatoes are affected by. Let us consider in more detail what spots appear with various diseases of tomatoes. 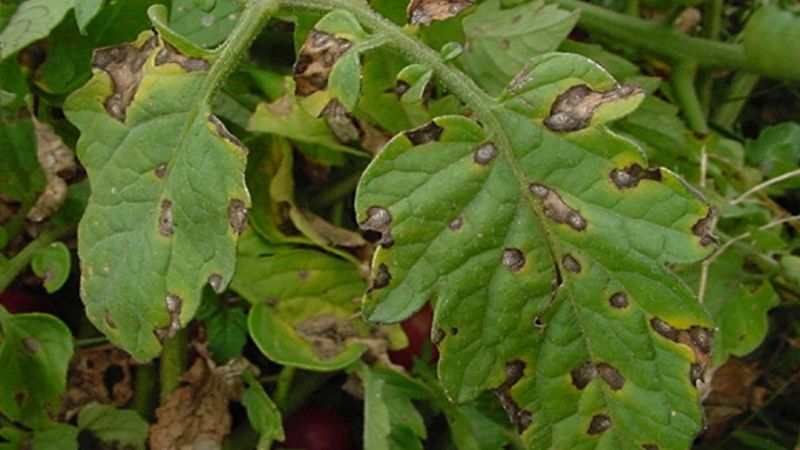 With Alternaria, tomato leaves turn yellow, brown-brown spots appear on their surface, spots appear on the fruits from above. The spots have a round shape, an oval depression of a grayish-brown color, a pronounced zoning. Later, the spots acquire a black tint - the primary sign of Alternaria.

Defeat anthracnose most often occurs towards the end of the growing season. With this disease, the leaves wilt, chaotically located depressed spots appear on the fruits. Initially, they are small, the same color as tomatoes, and then gradually grow, darken and become grayish brown.

Tomato mosaic is a type of viral disease carried by insect pests, contaminated seeds or soil. After infection, a mosaic pattern of yellow and green spots forms on tomato leaves. In young plants, the pattern is more clearly visible than in grown ones.

Important! Infection with nearby growing tomatoes occurs quickly, therefore, when a disease is detected, it is necessary to get rid of the affected plant as soon as possible - it will not be possible to save it, since the mosaic cannot be treated. 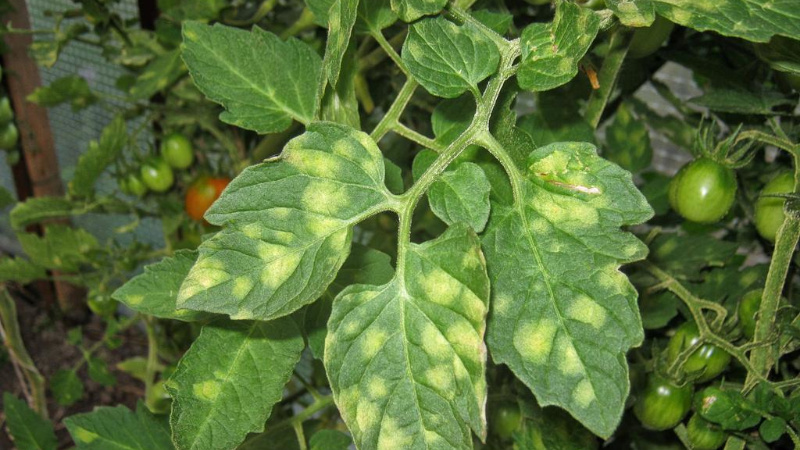 When cladosporium first, the lower part of the bush is affected, rusty spots appear on the foliage, after a while they spread to the upper leaves. Later, a velvety dark bloom appears on the bush. The inflorescences and fruits of tomatoes are less likely to be infected, but if this happens, they become brown and fall off.

Attention! Cladosporium is a dangerous bacterial disease that can destroy an entire crop in a matter of days.

Septoria is one of the most dangerous fungal diseases for plants. In case of damage, a white bloom forms on the leaves, the edges darken. Initially, the infestation of the lower foliage occurs, and then the disease spreads throughout the plant. If, after detecting such spots, no action is taken in a timely manner to eliminate them, then black dots will appear inside the white spots, the leaves will begin to fade and fall off.

Septoriasis - an infectious disease that easily affects the seedlings growing nearby. The cause of septoria disease can be poorly treated soil, in which there are spores of the fungus, or the use of infected seeds when planting seedlings. Basically, tomato septoria infection occurs in July, since during this period high humidity and suffocating heat prevail. 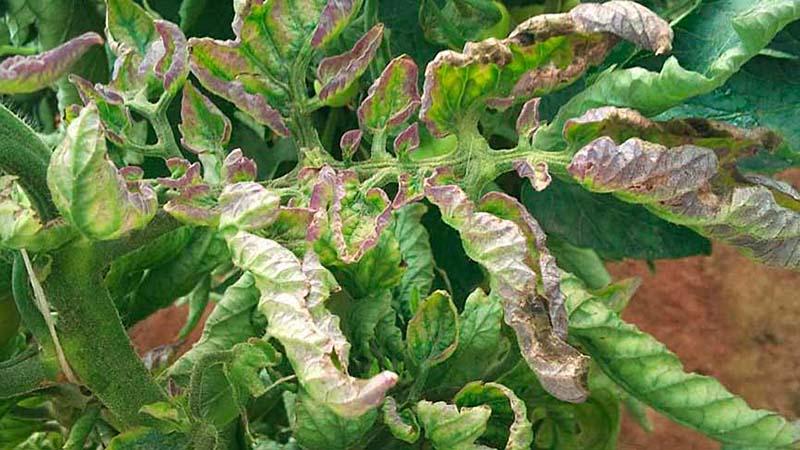 Late blight - the most common fungal disease of tomatoes. Formed due to fungi, the spores of which spread quickly, affecting other plants. Spores thrive best in shady and damp locations. With this disease, the foliage of tomatoes turns black, dries up and falls off, then the same thing happens with the fruits of the plant.

Leaf mold, or brown rot, is more common in greenhouses than outdoors. It first affects the lower leaves, and then spreads to the upper parts of the plant.

In advanced cases of the disease, the foliage of tomatoes completely dies off and falls off. This leads to disruption of the process of photosynthesis, as a result of which the yield is significantly reduced.

Common causes of leaf damage when growing tomatoes in greenhouses and greenhouses:

The reasons for the appearance of stains on tomatoes in open ground are the same as in greenhouses. There is only one difference: indoor plants are less likely to suffer from diseases.

In addition, the following factors contribute to the appearance of stains on foliage and fruits in the open field:

Spots characteristic of the leaves of tomato seedlings 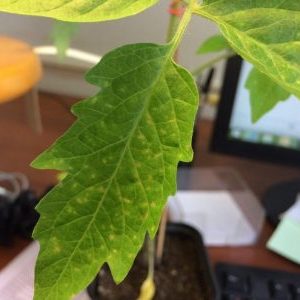 Spots on seedlings can appear with white rot. This is a type of fungal disease, infection with Sclerotinia libertiana Fuckce.

Initially, the disease appears on the lower part of the plant, in places of damage to fruits and leaves. Development is stimulated by temperature drops, high humidity and dense planting of seedlings.

To treat tomatoes for fungal and bacterial diseases, you can use folk methods:

How to deal with late blight in tomatoes? At the first symptoms process tomato bushes and soil with a 1% solution of potassium permanganate. If folk remedies did not help save tomatoes from late blight, then chemical solutions should be used to combat the disease.

Dissolve 20 g of Oxyhom powder (or two tablets) in a bucket of water and process the tomatoes. The drug is used at the first signs of this fungal disease. In total, no more than three sprays are carried out. After the last treatment, ripe fruits can be used for eating no earlier than 5-6 days later. 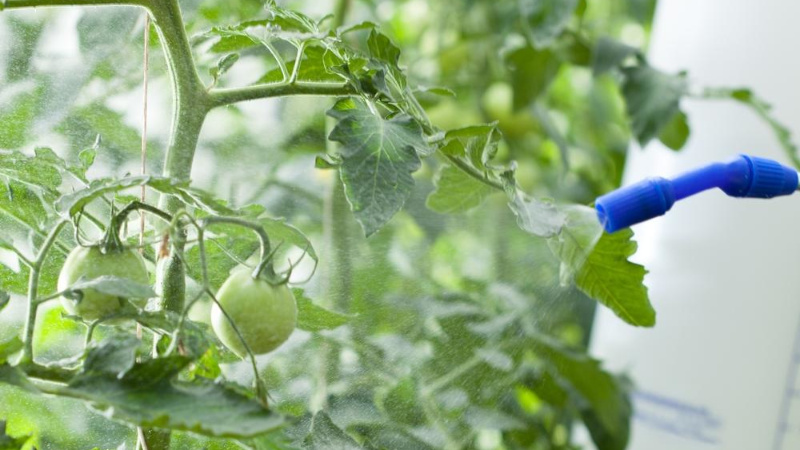 To avoid contamination of plants, preventive measures should be followed:

With improper growing of seedlings and non-observance of agrotechnical rules, the risk of diseases affecting tomatoes increases. If there are any spots on the leaves of plants, it is recommended to urgently identify the cause and start treatment in order to preserve the planting and save the harvest.

Tomatoes "Lopatinsky": characteristics and description of this tomato variety, photos and reviews

Why cherries are useful for a woman's body, can it be harmful to health, are there any contraindications

How to salt cabbage so that it is crispy: recipes in jars and a saucepan, tips and tricks for cooking and storage