Depending on the application, the content of starch, proteins, vitamins and other useful substances, potatoes are divided into table, universal, feed and technical. Today we'll talk about the stern. What it is?

This is a potato grown for domestic animals. The forage varieties contain a large amount of protein, which has a beneficial effect on the body of animals and significantly increases their productivity.

What are fodder potatoes

Fodder potatoes are grown for livestock and small livestock. Such potatoes contain a lot of protein, starch and dry matter necessary for the growth and weight gain of animals. It is a good replacement and addition to the main food. 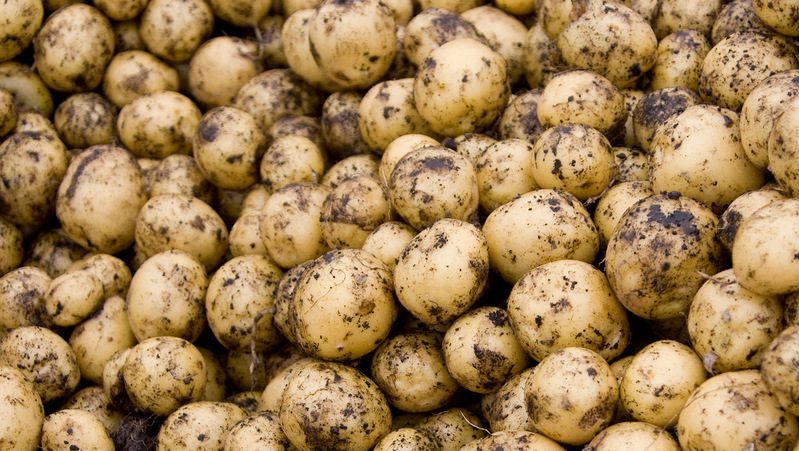 Characteristics of tubers, description of appearance

Fodder potatoes are usually 2-3 times larger than normal tubers. In contrast to the even, regular oval shape of table varieties, fodder potatoes have an irregular shape, with swellings and protrusions in various places, with deep eyes. The fodder potatoes taste fresh and watery... When cooked, it is very soft.

How to distinguish feed potatoes from table potatoes

Distinguishing feed potatoes from table varieties is not easy. The main differences between varieties are size, appearance, taste, chemical composition.

1 kg of fodder potatoes contains 16 g of digestible protein, the measure of the nutritional value of the fodder is within 0.31 fodder unit.

What is feed corn, how to distinguish it from food and where to use it.

Who needs fodder beets and why, how to grow them correctly and whether people can eat them.

Advantages and disadvantages of feed potatoes

The disadvantages of such potatoes are:

What are fodder potatoes for?

Varieties of fodder potatoes were created purposefully for use in animal husbandry as the main and additional food for cattle, medium and small domestic animals.

Who can you feed them 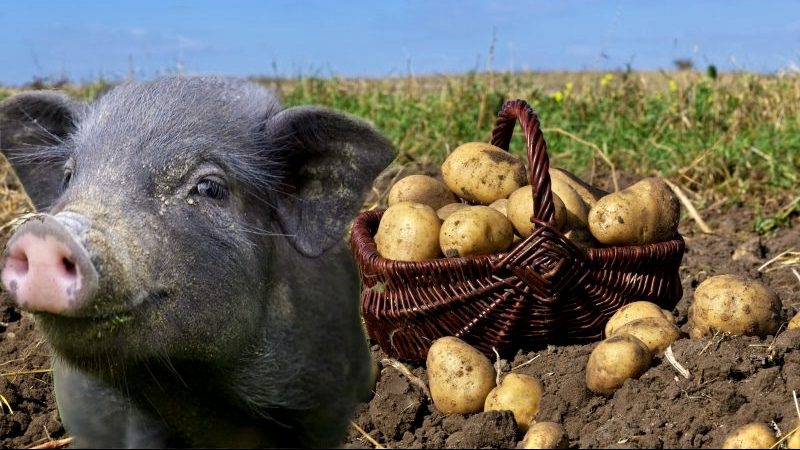 The culture is widely used in animal husbandry. Potatoes are 90-95% assimilated by pigs, which significantly increases their weight. For cows, horses, goats, sheep, raw tubers are used as an addition to the main feed.

For planting fodder potatoes, a sunny area is allocated on high-quality, fertile soil. It grows well in loose soil. Dense, poorly dug soil will slow down the growth of the bush and prevent large tubers from forming.

To prevent the invasion of pests and various diseases, the culture is planted after legumes and cereals, zucchini, cabbage, pumpkin.

Important! It is not recommended to plant potatoes in the same area for two consecutive years. 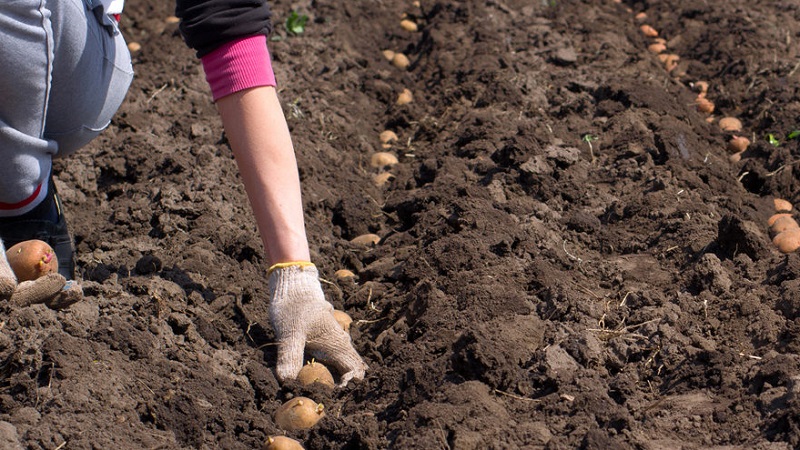 Attention! Large potatoes must not be cut into pieces for planting.

Vegetables are laid out in a spacious container in 2-3 layers. The container is placed in a warm, light room and left for 15-20 days to germinate the tubers. After the emergence of sprouts, the planting material is sorted out again and tubers with several strong sprouts are selected. Tubers without sprouts are not used for planting.

To prevent invasion wireworm the seeds are treated with a pink solution of potassium permanganate. Immediately before planting, they are sprayed with a faint blue solution of copper sulfate or Fitosporin to prevent fungal infections.

Reference. You can not plant a crop in wetlands, in soils with excess moisture. In such soils, the tubers will begin to rot.

In the fall, after harvesting, the site should be thoroughly cleaned of plant residues and dug deeply with the introduction of organic matter and mineral fertilizers.

In the spring, 3-4 weeks before planting, the site is fertilized with cow dung, spreading it in a small layer on the ground, and covering it with a layer of soil. Before planting the tubers, the soil is deeply dug up.

On the site, furrows are made with a depth of 10-12 cm. A distance of 65-70 cm is left between the furrows. Planting holes are made at a distance of 30 cm from each other.

Reference. Before planting tubers, the planting holes are moistened.

When planting, 200 g of rotted compost or 10 g of wood ash is first poured into each hole. Then the tubers are carefully laid so that the sprouts are not damaged. Sprinkle them on top with a loose substrate.

For fodder potato varieties with characteristic high tops, it is recommended to use the ridge technology of planting vegetables. During the sprinkling of the furrows, ridges are formed with a height of 15-17 cm.As the tops grow, they periodically pour soil onto the ridge until the embankment reaches 30 cm.

With the ridge technology, potato shoots appear 14-16 days earlier than with the usual method of planting. Thanks to this method, the soil will always be loose, the soil crust will not have time to form. The combs help keep the haulm upright.

The nuances of care 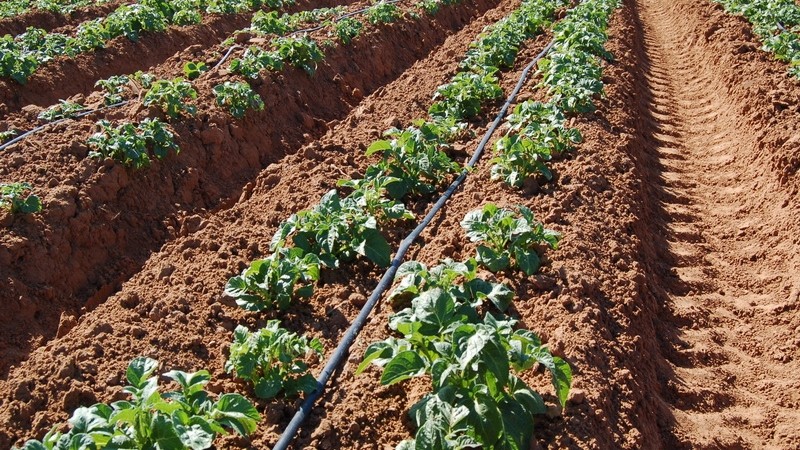 When planting forage varieties, it is important to take into account the acidity level of the soil. The increased acidity is normalized by digging up the earth with wood ash or dolomite flour.

Much attention is paid to aeration of the soil to enrich the root system with oxygen. This improves the development of the bush and the formation of tubers.

When planting, take into account the density of the soil. The denser and heavier the soil, the less the planting material is buried. In heavy soils, the depth of the hole should be 5-6 cm, in light sandy loam tubers are located at a depth of 9-12 cm.

To prevent the soil from drying out quickly during dry periods and to eliminate the growth of weeds, the potato beds are covered with a layer of mulch. For this, sawdust, straw, grass cuttings are used. Over time, mulch turns into useful humus.

Water is poured in small portions so that the ridges do not erode. Sandy and sandy loam soils are watered more often than sod ones. During the flowering of the crop, a sprinkling method is recommended for uniform irrigation of the bushes and to prevent the erosion of the ridges by the strong pressure of water.

The flowering of potato bushes indicates the process of tuber formation. At this time, plantings require a larger volume of applied liquid - 9-10 liters of water are consumed under each bush.

Attention! After the end of flowering, watering is stopped, since at this time the culture is susceptible to late blight.

During growth, potatoes take up a significant amount of nutrients from the soil. Therefore, the soil needs to be replenished with mineral fertilizers.

When planting tubers, add 1 glass of compost or 10 g of wood ash to each hole.

When the green mass grows to 10-15 cm, urea is used in an amount of 10-15 g per 10 liters of water. During the period of flowering and formation of tubers, phosphorus and potassium are added. Prepare the composition: 10 g of potassium nitrate and 25 g of superphosphate per 10 liters of water. It is useful to add 2-3 g of boric acid to the solution.

Attention! After flowering, nitrogen fertilizers are not used, since they lead to active growth of tops to the detriment of the formation of tubers.

It is recommended to alternate mineral fertilizers with organics.

Hilling should be carried out after each watering. Hilling maintain the height of the ridges, it is useful for saturating the soil with oxygen. Hilling is carried out until the harvest.

During the entire growth, the plantings are weeded regularly. Weed grass takes nutrients from the soil, inhibits the growth and development of potatoes. 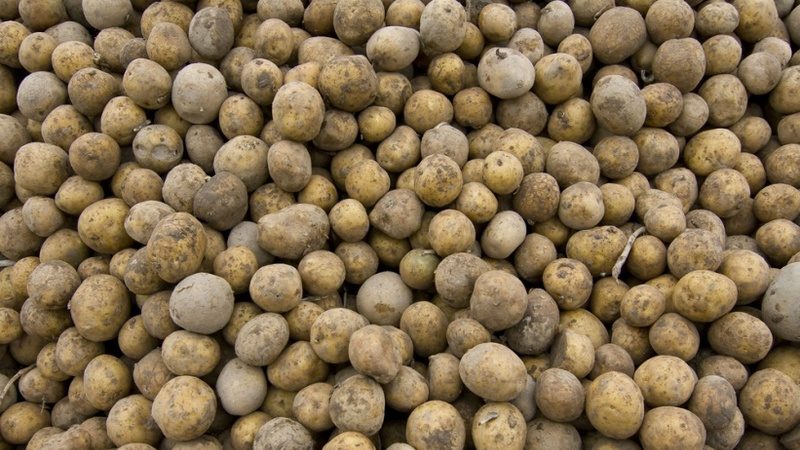 The most common potato disease is late blight. Dark brown spots appear on the tops, which gradually increase. This leads to wilting and drying of the leaves. Then the disease spreads to tubers.

For prophylaxis, tubers are treated with Fitosporin solution before planting. Also, for preventive purposes, when potato shoots reach 20-25 cm, the plantings should be treated with copper sulfate, adding 1 g of the substance per 1 liter of water.

Phomosis - a fungal disease, which develops in the second half of summer. In the initial stage, dark blurry spots appear on the leaves, and spherical growths form on the stems. On tubers, the disease manifests itself during storage - dark spots with dry rot are formed.

They fight the disease only with preventive methods. The planting tubers are treated with Maxim.

The most common potato pest is Colorado beetle... It is difficult to deal with it, during the season you have to apply insecticides three times and collect the larvae by hand. In the fight against it, the drugs "Komador", "Iskra", "Aktara" are effective.

Attention! Insecticides are no longer used when ovaries appear.

Folk remedies are also used: they spray potato bushes with infusions of tansy, celandine, and basil.

The leafhoppers feed on the juices of the foliage. The green mass of the bush is gradually dying off. Various viruses penetrate through the damaged areas. To protect potato seedlings, the preparations "Kruiser" and "Tabu" are used - they are used to treat the soil before planting potatoes. When pests breed around the bushes, scatter the drug "Karate Zeon".

When growing fodder potatoes in heavy clay soil, the development and formation of root crops is difficult due to the very high density of the substrate and its insufficient aeration. Peat and sand are introduced into such soil during digging.

You should be careful about watering. With excessive soil moisture, rot forms on the tubers. Potatoes grown with excessive moisture saturation in the beds rot during long-term storage. 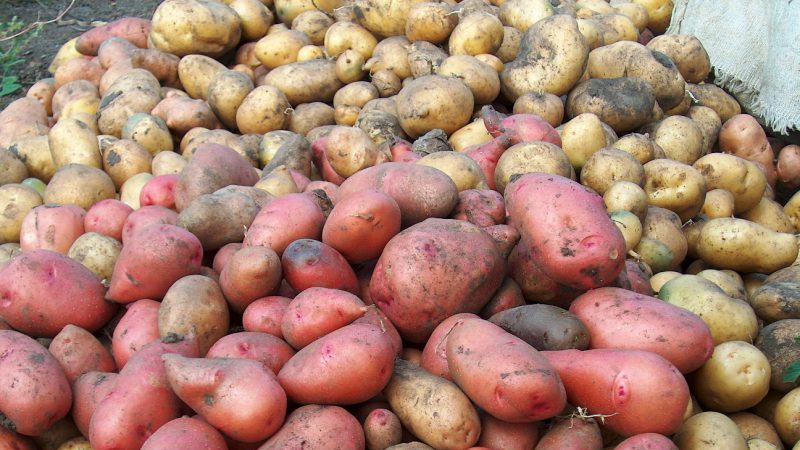 Experienced farmers advise leaving wide row spacings - more than 65 cm. This is necessary so that there is enough land for hilling.

Farmers note that the greater the distance between the bushes, the larger the tubers are formed, since as the area for growth increases, they get more nutrients from the soil.

It is also recommended not to wait for the tops to completely dry out before harvesting. Fresh green tops are good animal feed. When the tops turn yellow, their nutritional value decreases.

Any high-yielding potato variety that remains in surplus or is rejected as substandard is used for livestock feed. But fodder potatoes with a high content of proteins, starch, and dry substances are best suited for animals.

Fodder potatoes are highly digestible by pets and are an excellent addition to the main food.

Wheat harvesting: when the crop is harvested from the fields, grain harvesting methods, how winter and spring wheat is harvested, moisture

Cucumber Dirigent: reviews of those who grew, an overview of the hybrid, its advantages and disadvantages

Pickled cucumbers: in cans like barrels, under an iron lid, quick recipes for the winter, long-term storage methods

Growing potatoes according to the Chinese method

What should be the planting depth of potatoes, what it depends on and what it affects

Life hacks of experienced farmers: why pick flowers from potatoes and what does it give

How to store potatoes correctly and what temperature they withstand